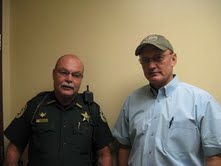 OKEECHOBEE, FL. --  A Florida deputy sheriff has been credited with saving the life of a young child Sunday afternoon, found choking on a piece off candy.

On September 1, 2013, at approximately 5:37 p.m., Deputy Bryan Holden was dispatched to a burglary in the northwest part of Okeechobee County, also known as the prairie.

While in route, he was flagged down by a man, who jumped out of his car and started running toward the deputy’s car, while holding a small child. The child had blood on his shirt and blood coming from his mouth. The father explained to Deputy Holden that his son was choking on a gummy bear.

Deputy Holden placed the 18-month child on the rear of his patrol truck and proceeded to administer back blows until the candy was dislodged. Okeechobee County Fire Rescue arrived and transported the child to Raulerson Hospital.

Deputy Holden made contact with the infant’s mother who stated he was treated and released from the hospital and doing well.

Sheriff May said of this incident, “During my entire career I have always heard that there is never a policeman when you need one. This family rushing their child towards town for help probably doesn't agree with that statement. I talked to two Fire/Paramedics this morning and they stated without a doubt, Deputy Holden saved this child’s life. In the last couple of years, this is the third case where this has happened to one of our Deputies and a life was saved. Deputy Holden is a credit to this department but to him it was all in a day’s work.”