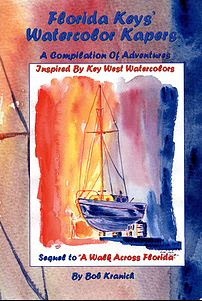 Western Union Cable Repair Schooner
What was that? I was coming up out of a deep sleep. It was music... melodic strains of piano music were drifting in the window. I could hear each stroke of the keys. Where was I? Looking around, I could see that I was in a very confined space. As I sat up, I remembered. I was in my uncle’s and aunt’s small camper trailer right next to their house. My Uncle Norman was playing the piano.
As I sat there it all came back to me… it was yesterday I had completed my A Walk Across Florida. It was 750-plus miles. This was the first bed I had slept in since I left home in Tampa, Florida, and started on my hike 5 and 1/2 weeks ago. Hurriedly I dressed, combed my hair, and brushed my teeth. I didn’t want to miss one of my Aunt Dolores’s meals. She was a great cook.
My uncle’s piano stopped as I walked by the coconut palm and went into the screened porch. This porch was on the back of the house, and as I remembered from many years ago, this was where they ate all of their meals. With the heavy wooden Key West hurricane shutters and the screens, it was just like being outside. This room was at ground level, and you had to go up about five steps to enter the kitchen.
“Hi Bobby,” my aunt said, with her slight German accent, beaming down into the porch area. “Have a seat. We are about to have breakfast.”
My uncle appeared smiling, “ I played to wake you up. How was it?”
“Uncle Norman, it was even more beautiful than the birds’ sounds I had wake me up on many of my hike mornings!”
“Now Bobby, I don’t know if I can compete with nature!”
One of Aunt Dolores’s daughter’s two girls they were raising came in and greeted me. They were my nieces. Sandy was the older of the two, about 12, and Robin who next appeared, was about 8 years old. We all sat down, and Aunt Delores brought in our plates of sunshine eggs, as she called them. “These eggs are cooked Cuban style, Bobby,” she said.
Uncle Norman began to speak, “Bobby, I have rented a single-speed balloon tire bicycle for you. It’s not very impressive, but it will get you around this island. After all, Key West is only about four miles long by one and a half miles wide.”
“Thanks, Uncle Norman, that will be great! I want to get started today. I have been sketching as I hiked down here, and if I can find some watercolors and art paper I’ll do some painting.”

After breakfast he showed me the location of the store with art supplies on the tourist map and then the bicycle. It wasn’t fancy, but it had a basket on the handle bars that would be useful to transport my necessary supplies…
My aunt gave me a sack lunch, and down the street I went.

It was easy enough then to find the artist supply store. Uncle Norman was right. They had everything I needed.
I bought a couple of watercolor pads, watercolor tube colors, a couple of brushes, a sketch pad, pencils and eraser. I was now in business!...
According to my map I was very close to the Key West Bight.
This is the place where the sailing ship from the Cayman Islands docks and unloads their catch of green turtles. In fact I  could see the masts of the Cayman Island ship, the A. M. Adams, in the distance.
I came to the docks, got off and had started to walk my bike toward the masts when I came adjacent to a beautiful old two-masted sailing ship. It was tied up to the pier that was jutting out from the concrete dock. There were a couple of guys working on a small piece of mechanical equipment right there on the pier. This was the only ship tied up there, so the natural assumption was that they were the crew of this ship.
I parked my bike and walked out onto the pier. I eased up to the pair, and just got down on my haunches like they were doing. They were concentrating on the piece of mechanical equipment. It appeared to be a small cable winch. All sorts of tools were strewn about the pier.
“What do you think mate, will we be able to salvage it?”
“Well Cap’n, if I can’t find something to jerry-rig it in the local hardware store, we’ll have to order some parts.”
“It’s old, but if we can fix it, we can save the firm money,” Jack said.
The captain looked up, “What do we have here?” He looked right at me.
“It’s a landlubber,” the mate said.
“Who are you, young fella?” the captain asked.
“I just finished a long walk down to Key West, hiking and camping. I’m visiting my uncle and aunt on Fogarty Avenue. That’s my bike over there on the dock. My name’s Bob, and I am interested in your boat.”
“Nice to meet you,” the captain said, standing up as he wiped his greasy hand on his pants and extended it to shake.
“I’m Captain Dick Steadman, and this is my First Mate, Jack Fryer.”
“So you want to know about our ship, matey. Come a’board, and we’ll set a spell. Jack is going to go downtown to the hardware store after lunch for some parts.”
“Jack, Bob is interested in our boat, and I’m about to tell him a couple stories of our adventures.”
“Bob, get set for some tall sea-faring tales,” Jack said with a smile.
“Pay no mind to him,” the captain said, smiling, “Here we go, Bob!”

Bob Kranich's second full-length book , Florida Keys’ Watercolor Kapers is composed of 336 pages. There are 12 stories running from 6 pages to as many as 72 pages, fully illustrated with 88 watercolors and sketches. The watercolors were made roaming around Key West after Kranich finished a 750 mile hike from Georgia to Key West. As you read these stories you will experience Key West, the Keys and the Caribbean. The stories span the time of the early 1800’s to 1969. bkranich.wixsite.com/bobkranich
Posted by Don Browne at 9:30 AM