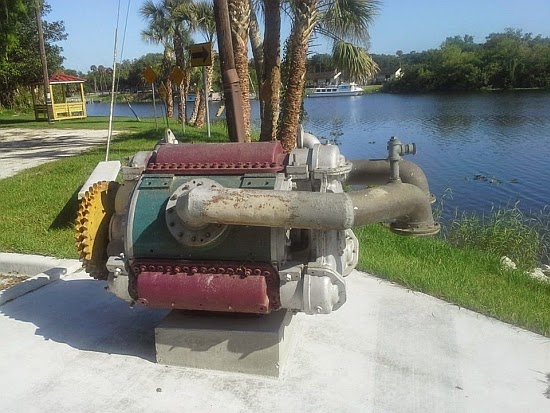 The engine, built by E. C. Warren in 1938 based on earlier patents awarded to world-famous electrical and mechanical engineer Nikola Tesla who was belatedly acknowledged as the inventor of wireless radio telephony shortly before his death in 1943, replaced the 500 HP reciprocating steam engines originally installed in the 1917 Herreshoff Manufacturing Company commuter yacht Navette, built for renowned financier J. P. "Jack" Morgan to enable him to comfortably commute from his Long Island estate to his Wall Street office, when Edward C. Warren purchased the sleek shallow-draft 114 ft. vessel some years after Morgan's death.

Warren and his family moved to the LaBelle area in the early 1950s.

Plans call for the construction of a shelter for the engine, similar to the colorful riverfront gazebo shown in the background, with a plaque highlighting the history of the Navette and its rotary steam engines that directs interested visitors to LaBelle Heritage Museum to view the original Herreshoff plans for the Navette, Warren's 1938 plans for the rotary steam engine, a model of the Navette as it once looked and other memorabilia from the Navette, and additional information on E. C. Warren and the Warren family as well as learning more about Nikola Tesla.
Posted by Don Browne at 11:39 AM