EVERGLADES NATIONAL PARK, FL. -- A traditional Hawaiian voyaging canoe arrived Saturday morning offshore from Everglades National Park in Everglades City on part of its world tour. The craft had this week departed from Cuba making it's way to Key West and on to Southwest Florida. It's next port will be Fort Myers.

The canoe crew, singing and dancing greeted officials from the Seminole Tribe of Florida holding a "Ceremony of Friendship" at noon.

The Polynesian Voyaging Society, and Kanaka Maoli, the indigenous people of Hawaii are sailing the large catamaran like vessel Hōkūleʻa around the world, having completed about half the journey so far. 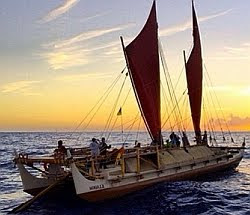 A cultural connection with the Seminole Tribe of Florida includes the Seminoles’ traditional dugout canoes, which were the primary mode of transportation in the Everglades through the early 1900s.

The event focused as well on preservation of The Everglades in the face of sea level rise and other environmental pressures with Park Superintendent Pedro Ramos, who pointed out he too grew up on an island, Puerto Rico.  A petition was prepared by the two indigenous peoples groups addressed to the United Nations seeking preservation of tribal and indigenous peoples' burial grounds world wide.