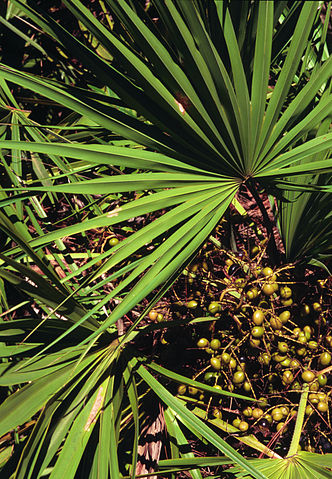 LABELLE, FL. -- Effective July 17, 2018, Saw Palmetto will be included in the Exploited Plant list in Florida and harvesting of the berries and fronds will be highly regulated.

This means that it is unlawful for any person to willfully destroy or harvest such plant without first obtaining written permission from the landowner and a permit from the state. Any person transporting for the purpose of sale, selling or offering for sale such plant must have a permit in his/her immediate possession.

Berry "pickers" have been frequently harvesting the berries between citrus and tomato season, most often on vacant lots or unfenced acreage and without permission of the land owner. The pickers then take the berries to temporary buyer stands usually found with signs in Spanish saying "Se Compra Bolita."

The bolita, "little berry" in Spanish are bought for about a quarter a pound. The berries are then sold again to processing plants, one large one operating in north LaBelle on Marshall Field Road off SR29.

The new regulation makes it unlawful for any person to falsify any paperwork/document that permits another person to destroy or harvest such plant.

Any person transporting or conveying on any public road or highway must have a permit in his/her immediate possession. Any person who violates, commits a Misdemeanor of the 1st Degree and is subject to be arrested.


The saw palmetto is a hardy plant; extremely slow-growing, and long-lived, with some plants, especially in Florida possibly being as old as 500–700 years. The leaves are used for thatching by several indigenous groups, so commonly so that a location in Alachua County, Florida, is named Kanapaha ("palm house"). Workers can often be seen on private property harvesting the fronds for various uses including chickee roofs, an open structure found on beaches, and other resort areas for shade.

Berry extract has been researched for treatment of people with prostate cancer. However, according to the American Cancer Society, "available scientific studies do not support claims that saw palmetto can prevent or treat prostate cancer in humans"

A meta-analysis by the Cochrane Collaboration found that saw palmetto berry extract given therapeutically, even at double and triple doses, did not improve urinary flow or improve the prostate gland size in men with benign prostatic hyperplasia (BPH). Two large trials published found the extract to be no different from placebo.

IF YOU ARE HAVING PROBLEMS WITH TRESPASSERS HARVESTING SAW PALMETTO BERRIES, PLEASE CONTACT YOUR LOCAL SHERIFF'S OFFICE OR CALL THE FLORIDA DEPARTMENT OF AGRICULTURE AND CONSUMER SERVICES AT 1-800-342-5869.

Information on getting a permit from Department of Agriculture - click here
Posted by Don Browne at 12:36 PM