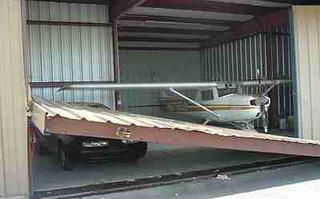 LABELLE, FL. -- Hendry and Glades county, as well as all of South Florida are in the recovery mode after the impact of Hurricane Wilma this week. In Hendry county, nearly half of all residents are without power as of Wednesday morning. The city of Clewiston is totally without power. Power in the downtown and Port LaBelle area north of State Road 80 was restored Tuesday. Throughout the area, extensive damage was done to older manufactured housing units built pre-1992, including failed wall systems and
roofs. Newer homes faired fairly well structurally except for roof damage
and skirting blown away. Conventional housing suffered primarily damage to
patios and aluminum structures and any light aluminum trim which was easily
blown away in the 100 mph winds. Hendry and Glades county homes are mostly
manufactured housing.

The most southern areas of Hendry county suffered the worst damage including
the Hooker's Point area in Clewiston, where most of the homes were older and
mostly manufactured homes. Also, southern Pioneer Plantation and Montura
Estate suffered badly, again the scene of older mobile homes. In Glades
county, northern area of Buckhead Ridge and Lakeport suffered badly, again
the scene of primarily manufactured housing.

The LaBelle airport had five aircraft hangar doors blown off their tracks,
damaging some of the aircraft inside. The airport is now being used for
hand-outs of water and ice during daylight hours. A curfew is being enforced
during the night in Hendry county, as well as most other counties and cities
affected. There were unconfirmed reports of looting in the city of
Clewiston.

In other areas of South Florida, Broward county had 98 percent of its
electric service out Tuesday and Miami-Dade also suffered badly. In Glades
County and Okeechobee County residents were asked to boil water if water was
even available. The main street in Okeechobee recovered power Tuesday. Water
was shut off in the city of Okeechobee by city officials. In Clewiston, boil
water orders were also issued although most sections were without water
especially on the east side.

In Hendry county, water and ice and some food were being given out at the
John Boy Auditorium in Clewiston and at the airport and the rodeo ground in
LaBelle. Vehicle traffic Tuesday extended several miles down State Road 29
from north of the Caloosahatchee River Bridge to the airport for many hours
as residents attempted to reach the aid sites.

Two units of the Florida National Guard arrived early Wednesday morning. One
is stationed at the LaBelle airport and the other at the John Boy Auditorium
in Clewiston.

The Hendry Regional Hospital is closed except for the Emergency Room,
operating on generator power. Schools and government offices are closed in
Hendry county although LaBelle school staff have been asked to report to
work Wednesday morning.

Some stores are opening especially hardware and food stores, although
gasoline is either non-existent or hard to obtain. Wall-Mart in Clewiston
suffered badly and was not open although they were reportedly giving out
"breakfast" foods Tuesday.