Man Barricades Self In LaBelle Home 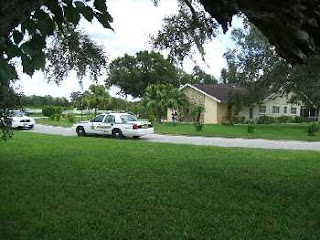 Elderly Man Holds Up In Home

LABELLE, FL. -- The Hendry Sheriff's office was in negotiations with John Waldrop Temple, 79 to give himself up after being at a standoff all afternoon with armed deputies surrounding the Laurel Oaks home in which he resides.

Deputies with rifles and other arms had surrounded all sides of the home in Port LaBelle for over fours hours. Sheriff Ronnie Lee was on the scene and leading negotiations with the man to end the standoff peacefully, after deputies and a minister failed to get Temple to leave a bedroom in the home. Neighborhood traffic was being routed around the scene, while an EMS truck stood by at a safe distance of a half-mile away.


The incident started when Temple allegedly would not allow a vehicle to pass him eastbound on State Road 80. Both vehicles stopped and Temple allegedly pointed a pistol at the other man and told him not to get out of the car. Temple left and went home.


Sheriff Ronnie Lee gave the "all clear" to the Laurel Oaks neighborhood surrounding 4502 Springview Circle about 6 p.m. as the situation defused after Temple was taken into custody and charged with aggravated battery with a deadly weapon. Temple has had a prior arrest for domestic violence, although charges were dropped by the State Attorney's Office.