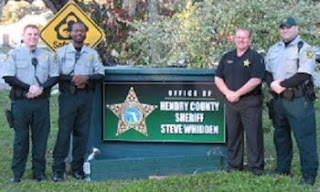 The award of a U. S. Department of Justice four-year grant this year allowed him to hire four additional deputies, which in turn, allowed him to reassign four experienced deputies to the newly created program referred to as COP�s. The Hendry County Commission agreed to fund the fourth year as a grant stipulation.

The sheriff has identified seven areas of the county which are experiencing crimes unique to their locations. The seven areas have been prioritized according to the severity of the crimes. The COP�s deputies have begun the program by developing community contacts and starting a dialogue with the residents to identify issues and working together to address them. They will develop a working rapport with city and county agencies, such as code enforcement, the health department, county courts and probation, etc. to help the residents eliminate conditions that facilitate criminal behavior.

An emphasis will be placed on Crime Prevention techniques and Neighborhood Crime Watch, with the assistance of Sgt. Barbara Brown, a certified Crime Prevention Practitioner. After school programs and activities, within communities, will be evaluated and enhanced, where practical, to offer the youth alternatives. The four deputies will work a flexible schedule and uniformed, or not, as the activity they are involved in dictates.

During January the COP�s deputies will be hosted by the Collier County Sheriff who has offered to provide them with a shadowing program for two weeks with his COP�s deputies who have been involved with community policing for more than a decade. During this time they will learn what ideas have worked and which ones failed. The Lee County Sheriff has recently made the same offer which will be accepted in the near future.

Hendry County Sheriff Steve Whidden stated, "This is an example of my commitment to the citizens of Hendry County to build better relationships with all agencies, both within Hendry County and adjoining counties and government agencies.  It was my promise to you to implement new ideas and programs that would help in making Hendry County a safer place to live and visit."
Posted by Don Browne at 12:49 PM