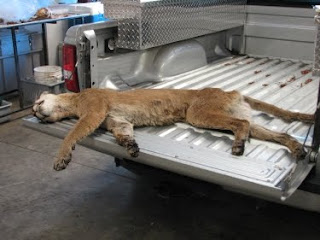 
Darrell Land, Panther Team Leader at the FWC said the female panther, identified as UCFP139, appeared to have been struck by vehicle and killed sometime during the night of March 11 based on the degree of rigor mortis and the lack of tracks leading to the carcass following recent heavy rains.

UCFP139 weighed 68 lbs., did not have a kinked tail or a cowlick and no transponder chip was detected.  UCFP139 was approximately 3 years of age.  This is the first road kill of 2010 and the second mortality overall.

The remains have been placed in a freezer at the Naples Office and will be eventually transported to Gainesville for a necropsy.  Following the necropsy, the remains will be archived at the Florida Museum of Natural History.
Posted by Don Browne at 1:23 PM