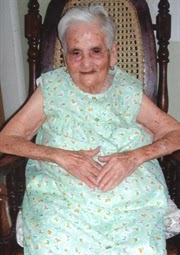 She was born July 14, 1905 in Santa Clara, Cuba, to the late Bonifacio and the late Jenoveba (Torrez) Suarez. She was a member of Saint Margaret Catholic Church in Clewiston.

The family of Adelaida would like to thank Yuneisy Arcia and her husband for the wonderful care they gave her.

Funeral service celebrating her life was held at 10 a.m. on Saturday, August 9, 2014 in Akin-Davis Funeral Home in Clewiston, where Father Jiobani Batista officiated. Visitation was held from 6-10 p.m. on Friday evening in the funeral home. Burial took place in Ridgelawn Cemetery.
Posted by Don Browne at 4:59 PM