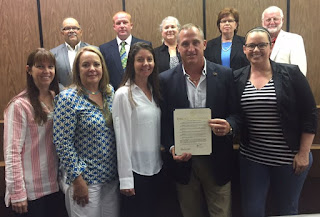 CLEWISTON, FL– The city of Clewiston has declared the week of March 13-19, 2017, Sugarcane Farmers Appreciation Week in recognition of the vital contributions the sugarcane industry makes to the state of Florida and the country as a whole.

The proclamation signed Feb. 20 by Clewiston Mayor Mali Gardner applauds Florida sugarcane farmers for generating more than $3 billion a year in economic activity and being leaders in technology and environmental stewardship of the state. Sugarcane farmers produce approximately 50 percent of the cane sugar and 25 percent of all sugar produced in the United States. They also donate generously to community causes and programs and have provided daycare centers, playgrounds, libraries, youth centers, swimming pools and other community benefits.

The proclamation was presented to the executive committee of the Clewiston Sugar Festival, which accepted it on behalf of the festival and sugarcane farmers.

“Florida sugarcane farmers are a great asset to our community and a strong force behind our economy,’’ said Hillary Hyslope, executive director of the Clewiston Chamber of Commerce and board member of the Clewiston Sugar Festival. “It’s wonderful to see they are getting the sweet recognition they deserve. Without them, Clewiston wouldn’t be called America’s Sweetest Town.’’

The Clewiston Sugar Festival will be held March 18 at Civic Park on US Hwy 27 in Clewiston. The annual, free event features performances by country singer stars Trace Adkins and Tracy Lawrence, who will be joined by other musical guests Parmalee, Runaway June and JJ McCoy.

Now in its 31st year, Clewiston Sugar Festival celebrates the region’s annual sugarcane harvest and the importance of sugarcane in Glades-area communities and Florida’s agricultural industry. It will have a variety of delicious food vendors, arts and craft booths, an antique car show, tractor displays and a kids’ park with games and inflatable jump houses.