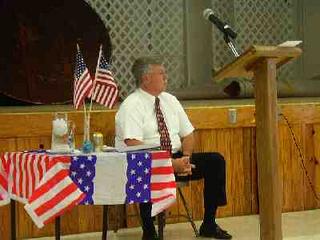 LABELLE, FL. -- Sherri Craichy, mayor of LaBelle for 12 years lost Tuesday's city mayoral election to Randy Bengston. Bengston, the county's EMS director,
advertised his campaign as "time for a change" and got his way, winning 477 votes to Craichy's 328 votes. Bengston has advocated hiring a city manager for the small municipality, while Craichy called herself a "full-time" mayor and denied there was a need to hire anyone else to run the city. Political observers say beating incumbent Mayor Craichy at the polls today was quite an achievement for first-time politician Bengston.

Joseph Robert Miller kept his city commission seat with 483 votes over challenger Richard Williams who received 279 votes. Supervisor of Elections Lucretia Strickland said 37% of the city of LaBelle's 2,185 registered voters voted, with the majority of voters taking advantage of early voting before the July 19 election day.