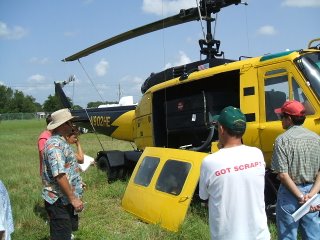 LABELLE, FLORIDA (August 5, 2006) -- After many years in agricultural
crop dusting services, Colony Helicopter put up all its equipment and
helicopters for sale at auction Saturday morning. Owner Bob Smith
says he's retiring and hired Bruce Scott Auctions to get rid of
mountains of old parts, and four helicopters. Several dozen
prospective buyers appeared at the Port LaBelle company's
headquarters early morning to look over the stuff available, and make
ready for the bidding to begin at 10 a.m.

Only a small percentage of the company's equipment assets actually
sold. The successful bidders ended up with mostly scrap metal parts
originally designed for helicopters, a 10 year old truck and car,
mowers, miscellaneous tanks and trailers, and the most expensive
item, sold at over $20,000, a turbine engine. A two-year old tractor
was not sold, as the auctioneer said a bid for more than $30,000
would be needed and none were forthcoming. The four helicopters,
none could legally be flown, one without rotor blades, and one
without an engine, were being auctioned off at minimum bids starting
around $120,000 each, or a bulk bid of three-quarters of a million
dollars was offered. There were no takers at those prices.

Bob Smith and Colony Helicopter got hit hard last year with
the passage of several hurricanes, and about the same time
discovered a long-time bookkeeper employee was allegedly helping
herself to the company checkbook, and arrested by the Hendry County
Sheriff's Department.