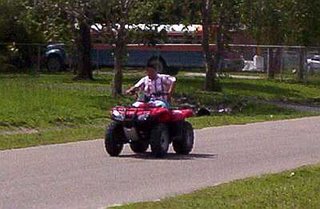 LABELLE, FLORIDA -- Sunshine Acres in LaBelle has an ongoing problem with 4-wheelers running amok all over the streets in the area, residents say. Although running unlicensed vehicles like these on any street or greenbelt area is illegal under Florida law, many areas of Hendry county are plagued with the sounds of these off-road vehicles and the damage they do to the grounds they run over.

In LaBelle, a retail store has opened in recent months selling the 4-wheelers. The Florida law only allows driving such unlicensed vehicles on private property, with the permission of the property owner. Thus, there are not a lot of places one can legally drive these.

One local Sunshine Acres resident says "These people are just having a field day over here destroying the road side ditches that the county road and bridge just spent good taxpayer dollars on to clean and reshape for better drainage." Wanting to remain anonymous he says the Sheriff's office hasn't been any help in controlling the vehicles use on public roads. He says, "They destroy people's driveways, and when you call the sheriff's department about them they (the dispatchers) just blow you off. They will take your number and tell you that a deputy will call you back and they never do."

Port LaBelle for years had a similar problem due to their extensive system of greenbelts behind many homes. People were driving everything from 4-wheelers to swamp buggies through resident's backyards. After hundreds of calls to the Sheriff's office and posting of warning signs at the Port LaBelle entrances, the problems has gone away, although an occasional 4-wheeler is still seen in the area.