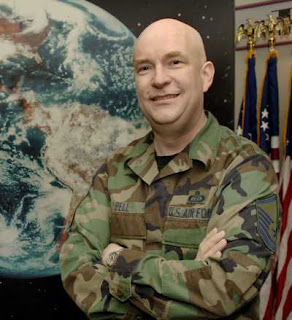 
LABELLE, FL. -- When we think of weather we normally think of local meteorologists demonstrating their latest and greatest Doppler or NEXRAD radar to help us decide whether or not to go for that weekend picnic. But for the son of a LaBelle man, forecasting the weather literally has a global impact, affecting everything from special forces operations in combat, to launching space shuttle missions to keeping service members and their families stationed overseas abreast of the local and regional weather.


Air Force Master Sgt. Louis D. Pell, son of Clinton Pell of Ida Court, in Port LaBelle's Laurel Oaks, is a weather forecaster with the U.S. Air Force Weather Agency, at Offutt Air Force Base, in Omaha, Neb., a team of more than 800 men and women who have become the premier agency for Department of Defense climatology forecasting.


Because of the agency's global operations, they house one of the largest data operations centers in the world. The Air Force Weather Agency has three major missions that are as diverse as the Air Force itself.


The American Forces Network Weather Center is just one of those operations that provides 11 separate weather broadcasts, forecasting weather for close to 120 cities, 400 daily forecasts that reach 2.5 million viewers by way of direct satellite and the Pentagon Channel. The weather specialists also affect operations in space, where technicians monitor our solar system for solar interference or atmospheric disturbances that can wreak havoc with satellite and radio communications.


But even more important, the Weather Agency forecasts also affect the combat operations in Iraq and Afghanistan, giving ground commanders vital forecasting information. Combat weather specialists accompany combat teams to keep up-to-date on by-the-minute changes to weather conditions. The information produced by the Weather Agency team is used not only to inform, but in some cases, to save lives as well.


"Our work enables the weather warfighter to obtain valuable training on equipment or techniques for which they might not be familiar, prior to and during deployments. It also allows non-deployed weather folks to access the same information, allowing for a standardized, higher level of knowledge," he said.


"I started working in the weather career field back in 1986, when we analyzed and colored paper charts that depicted the atmosphere. Now, computer terminals have replaced the paper charts, and increasingly sophisticated forecast models have and will continue to improve the reliability and accuracy of weather forecast," said Pell.


Pell and his weather teammates may not tell you whether or not you'll need an umbrella for this weekend's outing, but they do make sure our space missions go off without a hitch and can help save the lives of our men and women put in harms way around the globe.