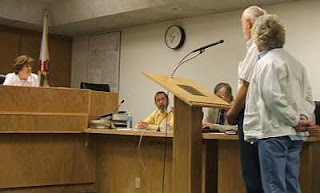 LABELLE, FL. -- What takes three Hendry county commissioners, two Hendry school board members, the Circuit Court Clerk and her assistant, County Tax Appraiser and her assistants, the county attorney, the tax appraiser's attorney, and a couple of dozen property owners?


The Hendry county Value Adjustment Board had an abbreviated first meeting today, attended by a majority of the county's government officials, but cut short by a last minute objection by Hendry Tax Appraiser Kristina Kulpa. The Board meets every year to hear tax payer petitions for lowering property tax appraisals made by Kulpa's office. This year over 1000 petitions were filed, while in most years the petitions can be counted on two hands.


This year CHL Holdings, Inc. filed about 1000 petitions to fight higher property assessments on their holdings of Port LaBelle lots. Today was to be the day the Value Adjustment Board, comprised of three county commissioners and two school board members were to determine whether Special Master Dan Stevens' recommendations made last month were to be approved, or not. Stevens, an attorney, and formerly the Hendry county attorney, has heard petitioner's arguments for several years as the "Special Master" for the Hendry county Value Adjustment Board. His final reports, just recently filed, recommended a lowering of the tax assessments on nearly all the petitions filed, finding that Kulpa's office "threw out" and didn't county many sales transactions last year, causing what Stevens said are tax assessments that are higher than they should be.

But Kulpa's office at the last minute, filed an objection to Stevens' lowered value recommendations, saying she didn't believe Stevens was qualified to judge property values. Kulpa's office wants someone else to determine property values, and indicates that Stevens made incorrect decisions during the hearings he held with taxpayers last month.


The Board heard Kulpa's argument, through her attorney, and voted this morning to continue the hearings at a later date, pending a legal opinion by the State of Florida Department of Revenue attorneys. The Department of Revenue has jurisdiction over tax collection matters and makes rules determining who is qualified to serve as "Special Master", or what the law now calls a "Special Magistrate."

The few tax payers who were heard this morning included Mrs. Phyllis Godette and her husband(pictured above) who complained that the taxes on their land on the river have skyrocketed. and that factor, plus last years's storms prevented them from building a home on the property, and say they are now locked into taxes many times higher than the previous year. They purchased the Caloosa Estates lot in April 2002 for $94,500 and now the tax appraiser says its worth $320,000. Unfortunately, deputy Tax Appraiser Cliff Wood said there is no remedy for the Godettes or other such taxpayers, as there is no maximum tax assessment limit on land unless it comes under a Homestead Exemption for which the assessment can't rise more than 3% a year.


Interestingly, ten lots on Caloosa Estates Drive, a few lots north of the Godettes but on the west side of the street, are only valued by the Hendry tax appraiser at from $13,000 to $16,900. These lots are located at the street addresses from 420 to 610 Caloosa Estates Drive. Daniel Pellicier of the Property Appraiser's office says the lower value on the tax rolls for those ten lots is probably because they are built from "spoil" dirt from the canal behind them. Presumably, the lots may have special drainage or building requirements for any homes places on them. Caloosa Estates Drive is one of the premier addresses in Hendry county - lots being either river front property or riverview property.


Charles Svirk, owner of CHL Holdings, Inc. complained to the Board that he had spent $83,000 in attorney and property appraisals to come before Dan Stevens to argue that his lots were over assessed. Svirk wondered aloud if he would have to spend a similar amount to argue his case again if a new Special Magistrate were to be hired by the Value Adjustment Board.

It seems Kristina Kulpa's office is playing "hard ball" this year to get every bit of property assessment at any cost. The amounts in property valuations the parties are arguing about would seem to cover in additional property taxes, what the government officials are spending on attorneys and staff time. The only people gaining anything in this Value Adjustment Board/Property Appraiser's office stafu seems to be the attorneys, at several hundred of dollars per hour plus travel expenses. Tax Appraiser attorney Wood comes from Broward county, Attorney Stevens came from Tallahassee. It would seems that it may be a bit longer for tax payers to find out at what price their Hendry real estate should really be valued.