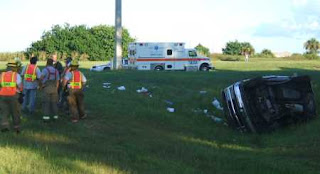 LABELLE, FL. -- Keomi Williams, of Clewiston was reportedly injured when her tan Chevrolet Surburban overturned Thursday at 6 p.m. at the corner of Birchwood Parkway and Cowboy Way in Port LaBelle.

A second driver's condition is unknown at this time. A friend of the family at the crash scene said Williams was on her way to classes at the LaBelle High School, only a mile west of the accident scene.

A white Dodge Stratus apparently did not yield the right of way causing Williams to run into a ditch and overturn. The second car was substantially damaged in the crash. Williams' parents arrived at the scene shortly after the accident and were advised of her condition by Hendry county deputies. This intersection has been the scene of several recent serious crashes.