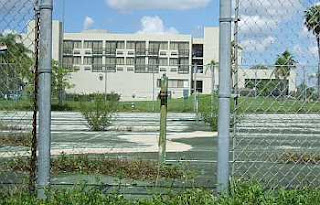 Michael Lafferty Gives Hotel Back To Richard Seibel
LABELLE, FL. -- In order to avoid a court foreclosure against the Port LaBelle Inn, Port LaBelle Resorts, LLC owned by Michael John Lafferty, gave a deed for the hotel property and adjoining land back to Richard and Mary "Dottie" Seibel operating as J & D Of LaBelle, LLP.
The deed filed August 20 in Hendry County was a "Deed In Lieu Of Foreclosure" meaning Lafferty was presumably delinquent in mortgage payments to Siebel, and to avoid a foreclosure fight in court, gave Seibel a deed to avoid the courts.
Lafferty Development, LLC., a new company operated by Michael John Lafferty of Naples and Arizona took over the Port LaBelle Inn December 1, 2005 from Richard and Mary "Dottie" Seibel with hopes to expand the 50-room operation which sits on 5.4 acres along State Road 80 east of the city of LaBelle, and sell off the adjoining land to developers for high density development.
The purchase included acreage zoned agricultural/leisure that was formerly part of the Port LaBelle Oxbow golf course. Surrounding property owners are now attempting to rezone the former golf course to allow high density development including condos, offices, and apartments. The land is listed in the 1999 Hendry Comprehensive Land Plan as a Regional Park, but the county's planning director says since the 2005 sale of the land, the county is now out of compliance with the county's land use regulations filed with the state's Department of Community Affairs. Community groups are trying to convince officials that they want recreational land use to remain, and not allow high density residential use here.
Lafferty bought the property under various partnership arrangements including Port LaBelle Resorts, LLC and MJL Main Properties, an Arizona company. Lafferty also created Fl East 31, LLC, another limited liabilitycorporation the same day in November 2005 as Lafferty Development, and formed No Paltalones W Division, LLC with Ft. Myers partner Samir Cabrera in October, 2005. Cabrera is a Ft. Myers real estate agent who has listed the property for sale with no success for the last several years.
The December 2005 $4 million hotel and land deal included a $3 million mortgage back to the Seibel's partnership, J and D of LaBelle LPC along with a 34-page security agreement covering collateral pledged, including the hotel's furnishings. Reportedly a very large ballon payment of the mortgage was due last month. The mortgage would have been the subject of a foreclosure suit if Lafferty fell behind in payments. Presumably, the Seibels were abel to see little if any of the $3,000,000, other than nominal interest payments, promised two years earlier by Lafferty on the mortgage note.

The Seibles sold their scenic Aqua Isles of LaBelle RV Park along the Caloosahatchee River in LaBelle last month for a reported $10,050,000, paying off a 2003 mortage in the amount of $3,000,000 and now can concentrate their efforts to the motel property at Port LaBelle.

Lafferty, through his MJL Main Properties LLC, has another balloon $1,610,000 mortgage due on November 20 on another adjoining 32 acre parcel of land next to the motel. The November 2005 mortgage calls for monthly interest payments to Danny and Deborah Perkins and John and Elizabeth Gee, as trustees for their respective family trusts.

Hotel and Restaurant Poorly Run, But Now Gets Cleaned Up

The motel property and restaurant have been the subject of numerous state health and safety citations and violations that were ignored by Lafferty and his managers through many state inspections. Customer complaints ranged from poor maintenance to no night clerk on site after 10 p.m..

New owner Seibel has been cleaning up the property including mowing the three-foot high weeds that had overgrown the property in recent years, and making sure state hotel safety and health standards are being kept. Siebel is now attempting to rent the motel rooms by the month as well as for nightly stays to up the motel's income stream.

Since there was little to attract overnight stays to the Port LaBelle motel -- no golf course, deteriorated tennis courts and unkempt grounds, the previous owner had catered to clientel including motorclycle clubs, tractor-trailer drivers, and construction workers.