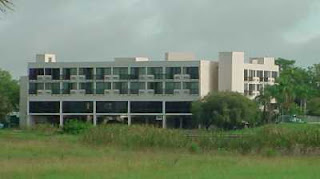 The 1980s half-hundred room motel property was originally sold off at auction as part of the old 27 holf golf course in June 2003 by Double Eagle Limited Partnership to a partnership owned by Richard and Dottie Seibel of LaBelle for $715,000.

The Seibel's then sold it to Michael J. Lafferty of Arizona for $4,000,000, the Seibel's taking back a large mortgage to finance the sale. This sale was in November 2005.

After Lafferty had some difficulties with keeping the hotel afloat, letting maintenance lapse, while Maine's Best Restaruant's failed reportedly to pay any lease payment to Lafferty, the Seibels started to foreclose on Lafferty, and Lafferty agreed to deed the property back to them in August 2007. Lafferty still owns the acreage to the south of the motel along State Road 80, which has been in foreclosure since July.

After repairing the hotel rooms and bringing it up to presentable condition over the last two years, the Seibels put the property back on the market and sold it to Yasechko. Yasechko, an experieced real estate operator in Ohio had been in negotiations over the last several years to purchase the motel and felt the new sales price of $900,000 for the hotel and its eight acres was a good buy.
Posted by Don Browne at 12:01 PM