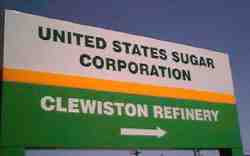 CLEWISTON, FL. -- After extensive deliberation, due diligence and public input, the South Florida Water Management District (SFWMD) Governing Board today voted 4 to 3 to accept a proposal to acquire more than 180,000 acres of agricultural land for Everglades restoration from the United States Sugar Corporation, contingent upon a specific amendment to the negotiated purchase and sale contract.

The transaction, subject to financing and U.S. Sugar's concurrence with the revised contract condition, would provide water managers with the opportunity to store and treat water for the benefit of the Everglades's "River of Grass", Lake Okeechobee and the St. Lucie and Caloosahatchee rivers and estuaries. The proposed purchase is the largest public land acquisition in Florida's history and the single most important action to protect the Everglades since the designation of Everglades National Park sixty years ago, say the Water Management District officials.

"This is a once-in-a-lifetime opportunity to acquire land in the Everglades Agricultural Area for restoration. The immense environmental benefit of these lands and their value to Florida's unique Everglades ecosystem cannot be overstated," said SFWMD Governing Board Chairman Eric Buermann. "Without losing sight of Governor Crist's bold vision for restoration, the Board has evaluated the details of the proposed acquisition and listened carefully to the input of Floridians, the Florida Legislature and local elected leaders. Amending the contract before us is an important step for delivering an agreement that not only meets South Florida's environmental needs but also better protects the interests of the taxpayers. This is good government and the public process at work. We are hopeful that U.S. Sugar will agree to this essential and necessary improvement to the contract and accept the Board's revision."

The District would take ownership of a minimum of 180,000 acres land and its improvements for a purchase price of $1.34 billion.
Under a separate agreement, U.S. Sugar would lease and manage the land for agricultural operation for seven years, avoiding more than $40 million in land management costs to the District over the life of the lease.

The lease arrangement would allow the release of the first 10,000 acres of property to the District at any time after the first year with appropriate notice. An additional 30,000 acres may be released in year six, on or after December 30, 2015. The lease agreement would also allow for the release of up to 3,000 acres in connection with land transfers to municipalities or other governmental entities. The company would retain ownership of its major assets, including a sugar mill, refinery, railroad and citrus processing plant.

Subject to court validation and suitable market conditions, the District would issue certificates of participation to fund the land acquisition. The parties must close on the purchase within 90 days of bond validation and no later than September 25, 2009.

To protect the agency's core mission in light of a fluctuating and challenging economic climate, the Governing Board strengthened financing conditions within the purchase and sale agreement offered by U.S. Sugar. Before closing, a newly proposed clause would allow the Governing Board to review the most current economic conditions – including interest rates and revenue streams – and verify the District's capacity to finance the purchase and accomplish its existing statutory mandates and legal obligations.

The District's extensive due diligence included multiple land appraisals, environmental assessments and engineering evaluations over more than 180,000 acres. The in-depth reports and data associated with the acquisition were presented to the Governing Board during a series of monthly public meetings and made available through the District's Web site at www.sfwmd.gov/riverofgrass as part of the public proceedings and deliberation.

The Everglades once covered almost 11,000 square miles of South Florida. Just a century ago, water flowed down the Kissimmee River into Lake Okeechobee, then south through the Everglades to the Florida Bay – the ultimate destination of the pure sheet flow. Because of efforts to drain the marshland for agriculture, development and flood control, the Everglades is today half the size it was a century ago.

The Everglades is home to more than sixty threatened and endangered species, including the Florida panther, American crocodile, snail kite and wood stork. The mix of salt and freshwater makes it the only place on Earth where alligators and crocodiles exist side by side.
Posted by Don Browne at 8:00 AM