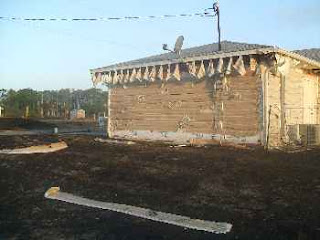 Square Mile Of Port LaBelle In Smoke And Ashes

LABELLE, FL. -- After Saturday's large brush fire, residents have moved back into their homes in southern Port LaBelle. An emergency shelter was set up at the LaBelle Civic Center for those evacuated during the fires. About a square mile of palmetto and pine covered lots went up in smoke as fire fighters from as far away as Okeechobee joined the LaBelle volunteer fire department in dousing the fires, fanned by fairly heavy easterly winds.

On Sunday, the fires were out, but smoke was still rising in the area west of Collingswood and Eucalyptus where the fire originated, apparently in an empty lot. A few dozen homes were at risk during the fire in this sparsely occupied section of Port LaBelle.

One home, built several years ago by Hendry County's Habitat For Humanity project, suffered extensive exterior damage as the heat from the fire melted the vinyl siding on the home.  Two burned out trucks were seen nearby. Several utility poles in the area were burned to the ground, while homeowers' primary damages were burned lawns after flames came within several dozen feet of many homes in this rural area.

Photo: A Port LaBelle home suffered damage from heat from the wild fires