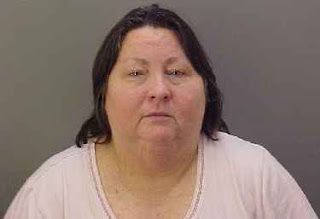 LABELLE, FL. -- Penny Barrow Noel, 59 and Gregory Paul Swann, 22 of LaBelle were arrested on Tuesday, May 19, 2009 with Charges of Crimes against Person, and Neglect Of Elderly Disabled Adult.

A neighbor reported hearing cries from a woman inside a house nearby and Hendry Deputies were dispatched. While responding to cries for help from an elderly woman, Hendry County Deputies entered and were allegedly sickened by the living conditions in which the elderly woman was kept.

Hendry Deputy Larry Preece was the first to arrive at 100 N. Cypress Avenue, a luxurious oak draped neighborhood in East Labelle after receiving the call of a female yelling for help. Upon arrival deputies were able to find the victim yelling through her bathroom window telling deputies she was locked in her home alone.

Deputies first spoke with the victim's daughter, 59-year old Penny Barrow Noel, and were able to gain access into the home and deputies were appalled by what they found, according to a press release from the Hendry county Sheriff's office.

In the victim's residence deputies found numerous domestic animals, including dogs and cats, as well as exotic birds, ducks, a goose, and a rabbit kept in allegedly unclean pens along with six to eight rats roaming around freely. Inside the home the stench of urine and feces permeated the air, say investigators. There were no visible signs of food or water for any of the animals. Animal feces and urine were found throughout the house, tracked into the carpet, and onto the linoleum by both humans and animals.

The victim's room was littered with clothing and the bathroom area was soiled with feces on and around the toilet area. The counters in the kitchen had dirty dishes and uneaten food on them. Open garbage littered the floors; the victim herself was wearing soiled clothing.

Penny Noel told Sheriff's office personnel that she had been attempting to find placement for her mother at a facility without success, and that her mother suffered from other illnesses.

After the investigation Hendry Animal Control took the animals into custody, the victim was removed from the residence and taken into protective custody.

Sheriff's personnel also located two other individuals within the residence and later determined that Gregory Paul Swann, 22 years of age, did in fact live at the home and was a caregiver for the victim.

Both Noel and Swann were found to reside in the house and are co-care-providers for care to the victim and animals. They both failed to provide adequate living conditions in the home necessary for good health and which were in fact detrimental to the health of the victim and the animals, according to the Sheriff's department.

Noel and Swann were arrested and charged with one count each of Crimes against Person, Neglect Elderly disabled adult without great harm and one count each of Conservation - Animals cause cruel death and suffering. Both Swann and Noel have been released on $15,000 bond.

The victim's name was withheld for privacy but is reportedly the homeowner.
Posted by Don Browne at 3:55 PM