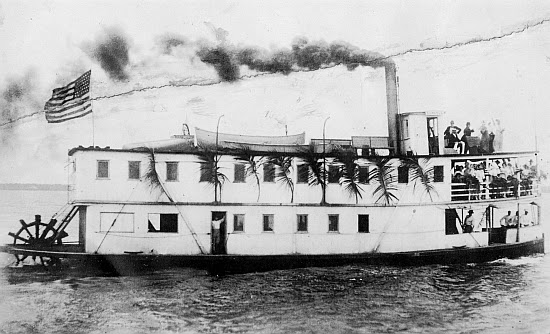 Glick will relate his experiences with the restoration and preservation of some of the Caloosahatchee's more famous paddle-wheel steamboats, such as the Suwannee and the Thomas A. Edison, that plied the river during the early days of the 20th Century and were no strangers to LaBelle's waterfront that Henry Ford either had replicated or restored for his Henry Ford Museum.

Photo: Riverboat Suwannee traveling up the Caloosahatchee River about 1915.

The program is open to all and there is no admission charge.

A questions and answers period will wind up Mr. Glick's presentation followed by a break for refreshments. The meeting will end with the election of officers for 2014/2015 to serve a one-year term and one director for a three-year term. The nominating committee will present a recommended slate of officers and three candidates for the open three-year director's term. Nominations from the floor will be in order with only current dues paying members of the museum eligible to vote.
Posted by Don Browne at 8:11 AM