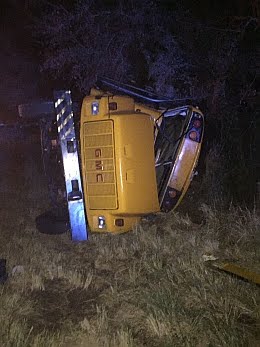 MOORE HAVEN, FL. -- Northbound and southbound US 27 was closed for about five hours Friday night due to a multiple vehicle crash approximately 5 miles north of SR 29 at 7:48 p.m. after a crash involving two semis, a passenger vehicle and a school bus.


The bus occupants are from 7th Day Adventist Church in Sunrise Florida. There were a total of 19 on the bus including three adults and 16 children.

Updates will be provided as information is confirmed. Motorist were advised to find an alternate route as it was anticipated that US 27 would be closed for several hours.
Posted by Don Browne at 11:07 PM