In The Theatre Spotlight - Brenda Barnes 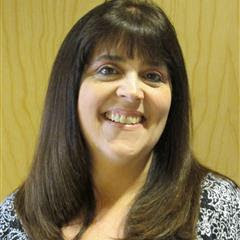 LABELLE, FL. -- Brenda Barnes thought about trying out for a part at the Firehouse Community Theatre for years, and her husband finally convinced her to do it three years ago. Her first role at FCT was the part of Randi in "Marry Walt" and then she was hooked! Since then she cracked people up in her role as Vernadette in the "Dixie Swim Club" and most recently her role as

Maxie in "Farce of Nature". She just loves the fellow actors/actresses that she has met over the last three years.

Once, a couple of years ago she sang on a Carnival Cruise Ship Stage as 'Cher', singing "If I Could Turn Back Time" with a live band and over 2,000 people in the audience!. (She even has pictures to prove it!...Brenda is not shy!)

Although Brenda does not claim to be a "singer"; she says she's just "goofy enough to get up there and do it"!!! She loves singing karaoke with Jeni at Don's Steakhouse too!

Brenda is a Board Member for the Firehouse Community Theatre and also writes articles and assists with Public Relations for the Theatre. She has also been an usher and assisted with the planning of the theatre's premier parties.

Brenda is married to Mike Felten and together they own and operate LaBelle Electric Inc. They have also been Corporate Sponsors of the Firehouse Community Theatre for the past three years. Additionally, Brenda works full time at the Florida Dept of Health as the Public Information Officer and Disaster Preparedness Coordinator. (She recently worked disaster response for Hurricane Matthew)

Brenda has been a busy community volunteer for many years as a Kiwanis Club of LaBelle member, Kiwanis Kids Day Chairperson, writing articles for the Caloosa Belle, assisting with the United Way Annual Fundraiser, Bell Ringer for Salvation Army and making desserts for the Caloosa Humane Society's fundraisers. Lately though her time is consumed by her two grandchildren: Jayna (5yrs old) and Kellan (3yrs old). She loves spending time with her family but also loves taking cruises "to get away from it all" for a little while.

You'll probably be seeing more of Brenda on stage at the Firehouse Theatre! She can't wait to see what crazy character she can play next season!
Posted by Don Browne at 11:32 AM