Brighton - A Walk Across Florida 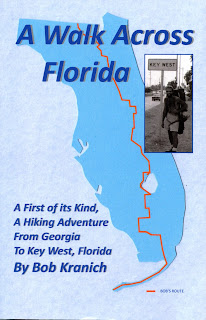 Excepts from Bob Kranich's A Walk Across Florida

It was getting dark now and I could hear lots of cows mooing off in the distance on the north side. I just couldn’t see any. A few dark building shapes appeared as I came into Brighton, and that’s about all there was, a few buildings. The place was all dark, kind of deserted. I could see one exception. There was a faint glow coming from a window in a one-story building on the north side of the highway. I walked by a couple of beat-up pickup trucks. The door where the light was shining was an old wooden screen door. I looked in through the screen and saw what appeared to be a cook shack with a dining room. Since the screen was slightly ajar, I opened it, stuck my head in and hollered.

“How ya doin’, I need some directions.”

A guy with a real chef's hat looked up from a frying pan with some sizzling catfish in it and said,

I walked in, pack and all. On the left was a sink built in a table and three large guys wearing cowboy hats, hunched around cleaning a mess of catfish.

“Here’s one needs a shave,” one of the cowboys said. I guess he thought at first I was a new hired hand.

“ I heard that there was a fire tower down the road towards the Seminole Indian Reservation.”

The next morning….Little did I know that I was soon to have a forced hitch-hike!

I was resting up against a huge Australian pine, when a cowboy drove up pulling a horse van with a jeep pickup. Now, this guy really looked the part, big hat, fancy shirt with those fancy pearl buttons and one of those small cigars dangling out of his mouth, A real sight! Kind of looked like Clint Eastwood. He nodded.

“Howdy, I’m going to give you a ride about three miles down the road,” he said.

“But you don’t understand. We’re going to drive about 500 head of cattle down this road and with you walking along they’ll go right through the fences.”

Ok, that was enough of an explanation: “I’m with you!”

I put my pack in the truck. A short distance down the road we stopped and picked up a small, weather-beaten, tanned cowboy. He was just sitting on a fence rail. He also had his big hat and all the trimmings. In fact he looked like he had just stepped out of a movie, spurs and all! I was beginning to think that I was on a movie set. I found myself looking around for the cameras.

We drove about three miles, just over Indian Prairie Canal, and stopped. I got out, and they thanked me for my cooperation. They then drove through an open gate along the opposite side of the road, left their truck and trailer parked in the field, and rode off into the range on the two horses that they had tied there. I would like to have stayed and watched but that would have defeated their purpose. I then saw the sign on the side of their truck, Lykes Ranch. They must have been connected to the people I saw at the cook shack the night before.