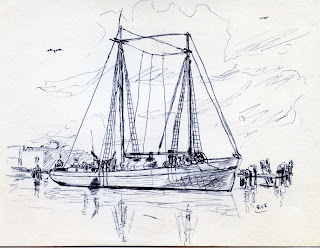 Western Union Cable Repair Schooner by Bob Kranich
Excerpt from Bob Kranich's second full-length book, Florida Keys’ Watercolor Kapers. Composed of 336 pages and 12 stories running from 6 pages to as many as 72 pages, fully illustrated with 88 watercolors and sketches. The watercolors were made roaming around Key West after Kranich finished a 750 mile hike from Georgia to Key West.

As you read these stories you will experience Key West, the Keys and the Caribbean. The stories span the time of the early 1800’s to 1969. bkranich.wixsite.com/bobkranich

(This is excerpt 4, it’s the second of two stories told to me by the captain of the cable repair Schooner, Western Union.)

Captain Dick Steadman’s boat the Western Union has just been intercepted by a Cuba gunboat and they want him to follow them back to Cuba:

His first mate, Jack went over to the control area and stopped one of the diesel engines. He then proceeded to flood the engine, and when he tried to start it a large puff of smoke came out.

Captain Steadman yelled out, “Jack, shrug your shoulders, and make it seem that we are having trouble with the engines.”

Jack went into his act of gesturing to the Cubans they were having trouble with their engines. Captain Dick slowly moved the schooner away from the Cuban gunboat using the one engine that was still running. He kept the electrical current turned off on the second engine. Then, he occasionally switched the starter on. This made it seem like he was trying to get the second engine running.

The Cubans’ boat turned around and their captain motioned for them to follow.

The captain stuck his head out and yelled to Jack, “Try to make them understand that we have only one engine, and we will follow very slowly.”

Jack continued his motions and tried to signal about the one engine.

This went on for a few hours with the Western Union slowly following the Cuban gunboat. They both could see that the Cubans were nervously looking skyward.
Then they saw a grey shape in the distance heading towards them as the two Navy jets screamed back overhead. It was a U. S. Navy destroyer. It was signaling with a blinker signal offering full protection. The Cubans must have been able to read that, because right after the boat came into view, the Cuban gunboat captain motioned for the Western Union to go on. Captain Jack didn’t need a second invitation. He cleared the engine he had been playing with and it roared to a sudden start. They put the hammer down and headed straight for Key West with the U. S. Navy destroyer following right behind. In fact, the Navy escorted the Western Union the 90 miles back to Key West. They had gotten within a half mile of the Cuban coast. A very close call!

The Western Union went into dry dock for restoration in 2008 and did not emerge with U. S. Coast Guard approval until three years later.

The city of Key West realized the Western Union was the last tall sailing ship built on their island. Consequently it was named the official flagship of Florida by the Florida legislature in 2012.*

Today, the Western Union is docked in Key West at the city’s bight at 202 William Street.* One can take a dock-side tour or a sailing trip. It is officially used by the non profit, locally supported SWUPS for day, sunset, moonlight, charter, and children’s educational activities as well as charitable events.*
Posted by Don Browne at 5:31 PM