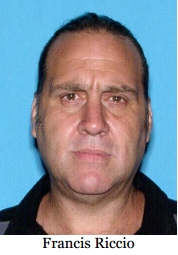 TITUSVILLE, FL. -- The Brevard County Sheriff’s Office culminated a two week investigation with the arrest of 45‐year‐old, Francis Riccio, for the homicide of his mother, 70‐year‐old Maureen Riccio, whose remains were discovered in Micco on May 14, 2013.

The investigation determined that Francis Riccio killed his mother during a violent argument. Francis bludgeoned his mother to death in a residence bedroom. After the death, Riccio purchased tools and cleaning items at a local store and then dismembered and transported the remains away from the death scene.

Francis Riccio, who was located in New York, was arrested early Thursday morning by arrest warrant, charging him with First Degree Premeditated Murder and Abuse of a Dead Human Body. The Brevard County State Attorney’s Office is currently working with authorities in New York to arrange for extradition back to Brevard County.

The investigation was initiated on May 14, 2013, when skeletal remains were discovered by a maintenance employee during a service call to the cellular tower located on Willowbrook Road in Micco, a small Brevard County community, said Major Todd Goodyear of the Sheriff's Department.

The witness stopped along the roadway, whereupon he observed what he at first believed was an animal carcass decomposing in the drainage ditch. He immediately notified the Sheriff’s Office who responded and determined that the remains were human. Investigators processed an extensive crime scene, excavating the skeletal remains along with other items of suspected evidence.

As the agents awaited the results of the autopsy, efforts were made to identify the victim who had been dismembered, placed in refuse bags and dumped in a swampy drainage area. The autopsy conducted by the Medical Examiner concluded that the victim died as a result of blunt force trauma and classified the death as a homicide.

Identification of the victim was eventually accomplished, and the investigation determined that the victim, who is a native of New York, moved to Brevard County Florida in late 2012. Her last known address was located at 319 Patrick Circle, Melbourne, which she shared with her son, an adult female and three children.

Based on the evidence, the agents believe the victim was killed in late March at the residence and then transported to the secluded area. The family then abruptly moved from the residence in early April, advising neighbors and the landlord that they needed to return to New York due to a death in the family.

Homicide Agents were able to determine that the suspect had moved to New York and traveled there this week to further investigate the incident. The Agents coordinated efforts with Homicide Detectives from NYPD Brooklyn.

The investigation is ongoing with the possibility of additional charges, said Brevard Sheriff Wayne Ivey. The Sheriff stated, “Homicide investigations are very time and resource consuming. This particular case presented very unique challenges that were literally buried to avoid detection and victim identification.”

Anyone with information about the investigation is urged to call the Brevard County Sheriff’s Office Homicide Unit at 321‐633‐8413 or CRIMELINE at 1‐800‐423‐TIPS (8477). All calls to CRIMELINE are confidential, and callers can remain anonymous and be eligible for a reward for information leading to an arrest.
Posted by Don Browne at 5:16 PM