Can You Balance On One Leg For 20 Seconds? Testing Brain Health 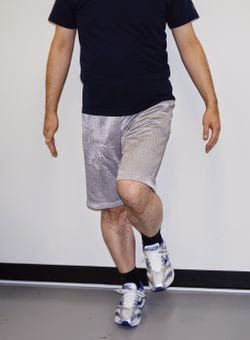 One-legged standing time may be a simple test used to measure early signs of abnormalities in the brain associated with cognitive decline, cerebral small vessel disease and stroke says a new study from the American Heart Association.

Struggling to balance on one leg for 20 seconds or longer was linked to an increased risk for small blood vessel damage in the brain and reduced cognitive function in otherwise healthy people with no clinical symptoms, according to new research in the American Heart Association’s journal Stroke.

“Our study found that the ability to balance on one leg is an important test for brain health,” said Yasuharu Tabara, Ph.D., lead study author and associate professor at the Center for Genomic Medicine at Kyoto University Graduate School of Medicine in Kyoto, Japan. “Individuals showing poor balance on one leg should receive increased attention, as this may indicate an increased risk for brain disease and cognitive decline.”

“One-leg standing time is a simple measure of postural instability and might be a consequence of the presence of brain abnormalities,” said Tabara.

The study consisted of 841 women and 546 men, average age of 67. To measure one-leg standing time, participants stood with their eyes open and raised one leg. The maximum time for keeping the leg raised was 60 seconds. Participants performed this examination twice and the better of the two times was used in the study analysis. Cerebral small vessel disease was evaluated using brain magnetic resonance imaging.

Researchers found that the inability to balance on one leg for longer than 20 seconds was associated with cerebral small vessel disease, namely small infarctions without symptoms such as lacunar infarction and microbleeds. They noted that:

Overall, those with cerebral diseases were older, had high blood pressure and had thicker carotid arteries than those who did not have cerebral small vessel disease. However, after adjustment for these covariates, people with more microbleeds and lacunar infarctions in the brain had shorter one-legged standing times. Short one-legged standing times were also independently linked with lower cognitive scores.

Although previous studies have examined the connection between gait and physical abilities and the risk of stroke, this is among the first study to closely examine how long a person can stand on one leg as an indication of their overall brain health.

Small vessel disease occurs due to microangiopathy of arterioles in the brain, making these arteries less flexible, which can interfere with blood flow. Small vessel disease typically increases with age. Loss of motor coordination, including balance, as well as cognitive impairment has been suggested to represent subclinical brain damage. Tabara and colleagues also found a strong link between struggling to stand on one leg and increased age, with marked shorter one-leg standing time in patients age 60 and over.

Although the study did not assess participants’ histories of falling or physical fitness issues, such as how fast they could walk or any gait abnormalities, Tabara said the one-leg standing test is an easy way to determine if there are early signs of being at risk for a stroke and cognitive impairment and whether these patients need additional evaluation.

Photo credit: Yasuharu Tabara
Posted by Don Browne at 9:52 AM