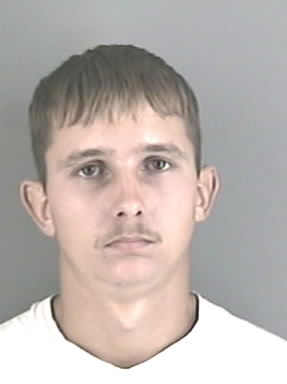 Defendant Wins One, Loses One This Week At Trial

LABELLE, FL. -- After being found not guilty in two prior cases against him, Timothy Eugene Alexander, Jr. was found guilty by a six-member jury Friday afternoon of resisting a correctional officer with violence and criminal mischief.

In an unusual series of events over the past 26 months as he sat in the Hendry County jail, Alexander ended up defending himself against the State Attorneys Office without the services of an attorney this week in two separate jury trials.

His court appointed attorney, Richard K. Sullivan quit last year after alleging Alexander was "threatening and aggressive" in their discussions, and told the court Alexander had "physically threatened" him "with violence."

Alexander was arrested in 2013 on a charge of arson, and was acquitted in 2015. He went to trial again this week two times before Circuit Judge James D. Sloan, 34-year old Alexander acting as his own attorney on a charge of attempted escape and then on resisting officer with violence charges.

He was found not guilty by a  six-member jury on Tuesday on the escape charge.  But despite having apparently obtained considerable legal training while in jail was not successful in defending against the resisting officers case.

During the Alexander trials this week, Judge Sloan and Assistant State Attorneys Jill Cabai and Amanda Brown gave Alexander a bit of leeway in courtroom protocols, the prosecution failing to rise when objections may have been warranted, while Judge Sloan courteously corrected Alexander's procedural errors, Alexander apologizing even though it was clear that the 34-year old defendant had a surprisingly good handle on the rules of Civil Procedure and trial decorum.

On Wednesday, his second trial began charged with resisting a correctional officer and criminal mischief. Acting as his own attorney again, he told the jury in opening statements that he believed he was a victim of "malicious prosecution," presumably because of numerous criminal charges filed against him while he was in the county jail the last two years.

He argued to the jury that while in county jail, he had chest pains and insisted on being taken to the hospital. EMS personnel showed up at the jail but determined he didn't need to be taken to the hospital at that time. He attempted to make a case that the officers used undue force to restrain him and get him back to his jail cell.

Evidence presented at the trial included a video and testimony of Alexander resisting officers' commands to go back into his cell after he was told he would not be taken to the hospital at that time. After struggling, three corrections officers eventually placed him chained to a restraint chair after tazing several times, Deputy Floyd Drummond claiming Alexander head butted him. Officer Daniel Snow had two buttons ripped from his uniform shirt by Alexander.

Alexander is a former Lee County Emergency Medical Technician and Fire Fighter and also operated a limousine service from LaBelle.

Alexander has two additional trials scheduled to begin February 1 on charges of battery on a law enforcement officer and criminal mischief. He also has an open case on charges of Sexual Battery and Assault.

Sentencing on this conviction is scheduled for March 4, 2016 at 9 a.m. at the Courthouse.

Update: On March 4, 2016 Judge Sloan sentenced Alexander to 24 months for resisting a correctional officer and 60 days for criminal mischief with credit for time served on both plus costs. He will be on state probation for 24 months. He is ordered to submit a DNA sample and within 30 day of release undergo a psychological evaluation and complete any treatment recommended.

After acting as his own attorney, Alexander has now been assigned a public defender to make an appeal of the case.

On February 4, 2016, he entered a no contest pleas to two counts of battery on a detention facility employee and received 364 day sentence on each with credit for time served plus costs. He has appealed this case as well. A separate case for battery on a law enforcement officer and criminal mischief was dropped by the State Attorney February 3, 2016.

Previous Timothy Alexander Stories
Posted by Don Browne at 10:22 AM