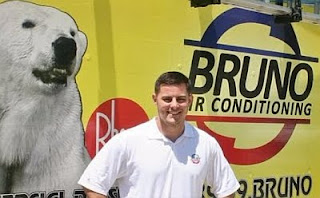 UPDATE January 2019: Bruno's company Bruno Total Home Performance is reportedly being investigated by the Florida Attorney General Office in a consumer protection investigation after 90 complaints were made about his business practices.

Bruno wants to sell you maintenance contracts, "Bruno Signature Series" air conditioners, mold protection units, surge protectors, and do all your electrical and plumbing work. And they love to take your air conditioner system apart and clean all the components.

But before you give anyone your business that may take thousands of dollars from your pocket, it's a good idea to do a bit of checking on the company through the BBB and other references. We did, and found some interesting facts.

According to the BBB, Bruno Air Conditioning is not accredited and it's rating was revoked in November 2015 by the Better Business Bureau. The BBB says "On 11/18/2015 this company's accreditation in the BBB was revoked by the BBB's Board of Directors due to failure to eliminate the underlying cause of complaints on file with the BBB."

The BBB says Bruno had 30 complaints made to them in three years, and 23 in the last 12 months, including 20 complaints about service and products, six about sales and adverting, three about billing and collection, and one about guarantees.

The BBB said, "BBB has received a pattern of complaints from consumers alleging that the business misdiagnosed or misrepresented issues related to repair or replacement, which lead to higher costs or estimates for the consumers. Additional complaints allege issues with the quality of service performed when the business is repairing or installing an air conditioner."

"In July 2015, BBB sent a request to the business to address this pattern and what actions the business has taken to help eliminate the causes of complaints. The business does not believe that it has a pattern of complaints, and stated that it believes in being upfront and honest with its customers about issues or potential issues their air conditioning may have."

In further checking their air conditioning contractor license, Bruno Air had a complaint (#2014006671) filed with the Department of Professional Business Regulation February, 13, 2014 and a citation was filed May 8.

Bruno uses a non-owner of his company, John P. Cordone as the qualifying agent for his new plumbing contracting service. Cordone has a complaint (#2015052414) filed with the DPBR for unlicensed activity December 3, 2015 and was issued a notice to cease and desist December 17. He did get a license a short time later on January 8, 2016. Cordone has his office address at a 3-bedroom home in Cape Coral.

Responding to an ad for an AC check up, what one of Bruno's employees will try to sell you after the radio advertised $29.95 checkup is a yearly maintenance agreement and in some cases a Bruno "Signature Series" air conditioner unit, a home surge protector, cleaning of the air handler coils and fan and maybe new ducts. Chances are Bruno admits, you'll end up writing a check for a lot more than $29,95.

Despite the $29.95 radio offer, additional service charges can be expected for disassembling and cleaning coils and fans with a chemical spray, and for new parts and equipment installed.

It's not clear if Bruno's technicians are paid on commission, as most air conditioning company's techs are actually sales agents. Bruno does say he hires people with no experience from the hospitality industry, hotels and restaurants, and trains them at his "Bruno University."

Bruno claims his 170 employees make 300 home visits a day in scores of yellow trucks with a Polar Bear graphic on the side. In addition to the Fort Myers office, his website shows offices covering Orlando, Sarasota, Tampa, and the Villages. His taped radio shows are apparently broadcast statewide, with cut ins for each market naming the area of service coverage for that station.

He says he has a 1% to 1 1/2% complaint rate and hires only those who pass drug and national criminal record checks. He's very careful about hiring. Bruno claims that one of the trades taught in prisons is air conditioning and says although ex-cons deserve a second chance, he doesn't hire them. He does like to hire people who are "customer oriented" from restaurants and hotels and train them at his "Bruno University." No air conditioning experience necessary.

His website claims his air conditioning "technicians are all NATE Certified" but a check online at the website North American Technician Excellence, a certifying organization in Arlington, VA, did not show Bruno Air Conditioning in Fort Myers listed, although six other local air conditioning companies were listed. Nonetheless, Bruno's website displays the NATE logo along with the BBB logo.

He says his company buys between $10 and $15 million in parts and supplies each year and trains his employees at "Bruno University."

Bruno promises a one and a half hour visit with a chemical wash of the outside condenser unit which he says will save $200 in electric bills every year. The technician will be checking electrical components, (usually the electrolytic capacitor, a $35 wholesale device, which can fail), check the inside air handler unit drain line which can get clogged and spill water, check and clean the coils, check the blower fan wheel for dust and clean it with chemicals at extra cost along with disassembling the coils at extra cost, check the inside electrical connections (again an inexpensive electrolytic capacitor). You may be asked to install a surge protector, and a UV light unit to kill mold.

The technician will check the duct size, explaining if ducts are undersized your unit will not last as long as designed since it will be running twice a long. You can expect to be told there's mold growing and should be eliminated. And sold an ultraviolet light system, basically one or more UV light bulbs. The UV light bulbs need to be replaced when they burn out at several hundred dollars a pop. Experts say that the ultraviolet systems are not needed. New-Press story on UV light complaint and Bruno.

Bruno is a partner in a biocide company, Biocide USA that will take care of the "mold." Cleaning of coils and blower fans seems to be a large part of Bruno's service profits.

Bruno says he started out at 17 as a helper at a small air conditioning company and now runs one of the fastest growing air conditioner companies in Florida.

Operating as Bruno Air Conditioning of SWFL, a fictitious name for Louis Bruno LLC, on Crooked Creek Lane, in a very large 3-bedroom home in Gateway, Louis Bruno started the Fort Myers business as a 23-year old in September 2012. It appears that he has since moved from that location even though no other address appears for the company on the Secretary of State records.

He bought the assets of Air Genie, owned by Gene Slade, a Bonita Beach company with negative consumer reports and a "D-" rating from the BBB . Some customers complained of over aggressive sales tactics and overcharges for service. Slade now operates Air Ninja LLC. Bruno appears to be following some of the same business practices. See Ripoff Report from former employee of Air Genie.

Larry Lipman is the retired CEO and son of the founder of Lipman Produce, Immokalee, the nation's largest producer of tomatoes for the fresh market. Lipman, 68, reportedly bought a 20 percent stake in Bruno's company and one of the investors in the building that houses the Bruno offices. Larry's son, Arby Lipman 27, is one Bruno's friends.