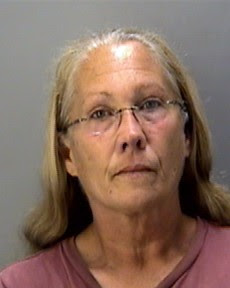 In the past month local businesses in the City of LaBelle have been burglarized where money was taken from the cash register and damages to the buildings sustained from the forced entry. However, Saturday morning, February 26, Investigator Michael McVey was able to locate and arrest Albritton charging her with several counts of burglary and theft.

After investigating reports of the burglaries, Investigator McVey viewed video surveillance from some of the businesses and was able to positively identify the suspect as Brenda Albritton.

Brenda Price Albritton was arrested and charged with Burglary to an Unoccupied Structure, Petit Theft, and Criminal Mischief. Albritton is currently being held in the Hendry County Jail on $18,000 bond.

Albritton worked for LaBelle Animal Rescue, and is a twice convicted thief, the latest conviction on January 19, 2011