LaBelle Landmark Grocery Out Of Business? 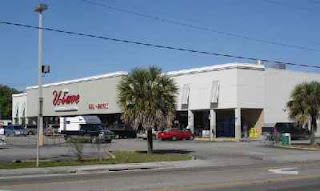 LABELLE, FL. -- LaBelle's U-Save Supermarket at the corner of State Road 80 and State Road 29 appears to be closed after decades of service to Hendry and Glades county area residents and visitors.

A sign found on the door Friday says the store will be closed for "remodeling," but the appearance of the store has taken a downward move in the last few months as shelves and freezer units were not restocked, leaving much of the store empty of both food and customers.

The LaBelle store, straddling LaBelle's Main Street and Bridge Street, before a sale September 3, 2010 to Oqab Abuoqab, was a part of the Tampa based B & B Cash Grocery Stores, Inc. chain, founded in 1923 that included a store in Moore Haven and LaBelle.

Along with the LaBelle store, Abuoqab bought U-Save stores in Clewiston, Belle Glade, Okeechobee, and Fort Myers. The Moore Haven store was not sold. At the time, he was said to own or operate 15 groceries or convenience stores in Florida.

U-Save Supermarkets around Florida are now under investigation by the U.S. Department of Labor for possible violations of minimum wage and overtime pay

Owner Oqab Abuoqab, in recent years has purchased numerous low-budget grocery stores catering largely to Mexican and low-income customers in southwest Florida including the LaBelle store and in Fort Myers on Palm Beach Boulevard, advertising under the Bravo Supermarket name.

Sun Commodities, Inc. of Broward county filed a suit against Abuoqab and his companies in Federal court in Fort Myers on April 28, 2011 for violations of Federal Agricultural Commodities Acts.

Abuoqab purchased all the grocery stores with relatively small cash down payments, and highly leveraged the buys through bank loans and chattel mortgages with Associated Grocers.

His family also purchased three years ago, an Hispanic oriented retail strip mall on Ortiz Avenue in Fort Myers, also with a small down payment, and financing by the seller and First Bank.

He has been associated with former Hendry County Engineer Rock Aboujaoude, in various businesses, many now out of business.

Aboujaoude along with Rafic Aboujaoude owns Jacks On Joel, LLC, and owns Rock Enterprises Inc., a civil engineering firm in LaBelle for many years.

Abuoqab was the majority partner with Aboujaoude in LaBelle's Trading Post from late 2005 to 2009 when Abuoqab agreed to buy out Aboujaoude. Abuoqab was unable to pay, and sold the Jacks On Joel store to Aboujaoude, where Aboujaoude's brother Rafic runs the store.

His business history includes many dissolved corporations formerly in the grocery and real estate business.

As of Friday, the LaBelle store's eight employees had not been paid their final paycheck.

The large parking lot on LaBelle's main street intersection is empty of cars and may remain that way for a long time.

Update: The Clewiston U-Save also closed on Monday October 10th. The Okeechobee store is still open as of Thursday October 13th. With the pending legal problems of the company it may be predicted that other stores owned by Abuoqab may end up like Clewiston and LaBelle's.