LABELLE, FL. -- Neighbors in a Port LaBelle neighborhood were aroused early Monday morning July 2 when a large group of teenagers were allegedly drinking and playing loud music. One guest with a criminal drug record and two others allegedly hid in the house and avoided detection after a search by Hendry County deputies.

According to Hendry Sheriff's office records, a complaint was received at 2:10 a.m. Monday morning regarding loud music and a large teen party occurring at 4516 Springview in the normally quiet Laurel Oaks neighborhood of Port LaBelle.  The complainant indicated an underage female was renting the house, and had hosted numerous rowdy weekend parties there.

11 minutes later, at 2:21 a.m., a unit from the Hendry Sheriff's office arrived on scene and questioned 19-year old Taylor Devon Jordan (pictured above), an apparent guest at the party. Later an additional officer arrives. The house is owned by an out of town owner and is rented by Theresa Milks Barber. Barber's teen daughter lives there, while Barber was apparently not at the home this particular evening and next morning.

Jordan, the only name mentioned in the incident call record, has a criminal arrest record, according to the Sheriff's office, for December 28, 2010 charges of grand theft of a firearm, armed burglary, prowling, and contributing to the delinquency of a minor.

In February 2012, the court ordered he pay restitution of $200 to the victim, court costs, and a pre-trial diversion program on the burglary and theft charges. The remaining charges were dropped or not prosecuted. He's been paying installments on the court costs, last paying $113.08 on June 11.

Sometime during the investigation, observers say a deputy went into the house for a period of time, apparently to see who was there and what was going on inside.

At 3:03 a.m., forty-two minutes after arrival, the deputy advised dispatch he was waiting on the home owner's representative to arrive. The owner has a daughter in LaBelle taking care of the property.

At 3:29 a.m. the deputy reported the call to the dispatch office as "closed." Deputies were on scene for one hour and eight minutes.

Sources say after the incident, an online conversation on a social media site, took place among about 15 teens indicating the Sheriff's office were looking for guests inside the house, some of whom were allegedly hiding in the house and not discovered.

Johnathon Richard L. Trnka reportedly alleges in an online conversation, that he and others were hiding in the house and avoided detection by the deputies. 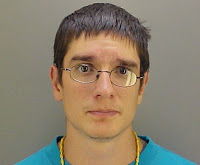 In an online conversation, Trnka (mugshot pictured at left, a 21-year old 2009 Clewiston High graduate with a March 2012 arrest for cocaine possession and drug trafficking ) said, "I still can't believe me and my ni*gas had to straight anne frank that sh*t and hide in a room for hours while the cops fuc*ed up...what a crazy fuc*ing night!"

Trnka said, "kota's on that real sh*t, we have combined some crazy ass people from both towns haha and whitley hell yeah ended up getting 8 dollars lol all in singles from like 6 different people...thank god :) jamies right they did come back and I did make it home and thats all that matters."

Trnka added, "your right haha doesnt matter if its cops or gangs my ni*ga always manages to make it back lol"

Jamie Lynn G said, "lol honestly you guys were the last people i thought would get away. TBH i thought LaDanian **** took the fu*k off. lol"

Whitley **** (LaBelle High) said, "Lmboo and trnka your friends left you!! That was so da*n funny...Baylen gave us the play by play on how yall dipped. LOL" (Note: dipped meaning got away fast)

Dakota C****** (an 18-year old 2011 Clewiston High grad) said "I truly love all you guys! But I do feel like we have put some crazy Clewiston people with some crazy Labelle people Lmfao party party partyyy!!!"

Dakota added, "Haha I had to go outside with the cop and the car was there, I come back out later when he made us leave that sh*t was gone I was like hellll nadhhhh lol there slick as fuhhh and Trnka yuou know I was coming back I always come back "dennys" at 4 in the morning beating down the block lmao."

Jamie Lynn added "Nobody goes hard like us--i love you guys!" (Braxton and 8 others 'liked' the comment on the social media page)
Posted by Don Browne at 12:41 PM