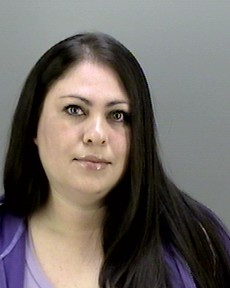 LABELLE, FL. -- A Hendry County, Florida corrections officer has been arrested for allegedly bringing food into the Hendry County Jail and giving it to a prisoner. Another prisoner allegedly said he saw her kissing the jail inmate.

5' 8", 200 pound Gonzales had been working as a corrections officer in Hendry county for about three years, starting her job April 10, 2010.

Before working for the Hendry County Sheriff she worked for the Florida Department of Corrections beginning September 7, 2007. She was released on $500 bond the same day of the arrest.

The investigator's probable cause narrative says the investigation began on November 30, 2012 when Detective Sergeant Christian Buchhofer went to the Hendry Jail to get a statement from 34-year old inmate Anthony Lee Barnett about Deputy Gonzales bringing food to 41-year old jail inmate Lorenzo Brooks. Barnett was in jail on failure to pay child/wife support charges.

6 foot tall,  256 pound Lorenzo "Low Boy" Brooks (photo below) of Clewiston was jailed March 22, 2011 on charges of aggravated battery with a deadly weapon, criminal mischief with property damage, and an out of state warrant.

Seven deputies and the jail control room operator all gave statements to Buchhofer who concluded that two deputies and the control room operator had seen Gonzales and Deputy Peter R. Thorton bring in "large amounts of food into the Annex building." But none had seen the food given to inmates but it was determined the amount of food brought into the jail was more than two people could consume. 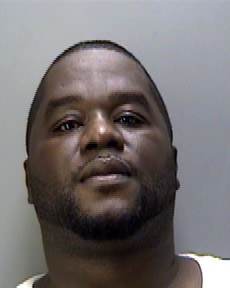 Another deputy had observed Gonzales bring in a bag of homemade food and give it to inmate Brooks. When the deputy asked Gonzales about the bag, Gonzales allegedly said, "I brought some food for Brooks."

The deputy said she saw Brooks then eat the food. She said she also observed other occasions when Gonzales and Deputy Thorton brought in "large amounts" of food.

Another deputy said Gonzales brought in a tub of ice cream, four bowls and four spoons on the occasion of Brooks' birthday on November 1, 2012. The deputy said ice cream was offered to him but he declined and left the building.

Another deputy reported inmate Brooks had asked him to bring in a "Flex" magazine which he declined to do. In discussion with Gonzales, she reportedly told the deputy to "lighten up, this is Hendry County, not DOC" and it would be ok to bring in the magazine, she said.

Other officers noted they had seen inmate Brooks give Deputy Thorton, while on duty, a haircut in the jail yard (sally port).

Inmate Barnett said he had observed Deputy Gonzales give inmate Brooks food from outside the jail and said he saw Gonzales kiss Brooks "on the lips" in the jail sally port area while she was on duty.

In a December 6, 2012 interview Deputy Thorton denied giving food to the inmate, but said Deputy Gonzales had given "left over food" she was not going to eat to inmate Brooks.

It is illegal for to give food or clothing to inmates without permission from the Sheriff or person in charge of the jail under Florida Statute 951.22.
Posted by Don Browne at 6:16 PM