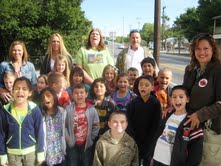 Fifty-two students, their teachers and the parents acting as chaperones were treated to a slide show showing the schools formerly located on the what is now the UES campus starting with a photo of the original 1891 LaBelle school, completely thatched with cabbage palm fronds and its two room frame successor with its wooden fence and stile (wooden steps that allowed the teacher and students to cross the fence while keeping out animals like horses, cows, and full grown hogs) that was replaced in 1915 by the two-story brick building with white columns that served LaBelle students until it was demolished in 1958 to make way for the present gymnatorium that still serves the current school and the community.

The children enjoyed the museum's collection of fossils housed in the museum's natural history section, donated by E. T. Rennolds, Jr., that range from mastodon bones and teeth to whale vertebrae to deer antlers and fossilized remains of other animals that lived in this area before man first came to the Caloosahatchee Valley over 10,000 years ago. Meredith Marcum's mural -- still a work in progress -- showing how our area may have looked in prehistoric times helped to set off the archaeological displays.

Hearing about the Navette, a commuter yacht originally built for financier J. P. "Jack" Morgan in 1917 and later the LaBelle home of mechanical engineer Edward C. Warren and his family, now a sunken relic in a man-made oxbow of the Caloosahatchee some two blocks east of the museum, seeing a model of LaBelle's original 1910 jail that once stood in what is now Barron Park as well as Terrence McCourt's models of vintage vehicles ranging from a six-horse Conestoga freightliner to a florist's horse drawn delivery van were just a small part of the children's introduction to LaBelle Heritage Museum and its collections.

LaBelle Heritage Museum welcomes tours and field trips by LaBelle school children, Scout and 4-H groups as well as adult groups of 12 or more if given at least a week's advance notice for scheduling. Teachers, youth leaders, and group sponsors are asked to call the museum, 863-674-0034.
Posted by Don Browne at 10:15 AM