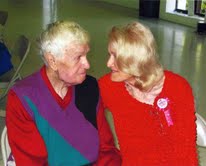 Paul had completely arranged a surprise birthday party for Nikki Yeager's 70th birthday on Thursday at the LaBelle Civic Center with people from all walks of life attending.

Nikki said, "Thursday March 28th had been a very busy day for him - he rushed out early, apparently to make some final arrangements. Then he drove us to his radiologist oncologist doctor's appointment in Ft Myers and on the way home, while driving he wrote on his 'white board' that I needed to be ready by 5:30 because we were going to meet another couple for dinner at steak house here. On the way to dinner, he needed to 'pop-in' to the civic center and Surprise!"

She said, "Just over 24 hours after the party, he passed away in route to Hospice House. He was so special. His earthly battle is over and he is free of his body at last. He is at peace having his own celebration now - with his Mom and Dad - and daughter Wendy and so many others who went before!"

No arrangements have been made yet.
Posted by Don Browne at 8:03 AM