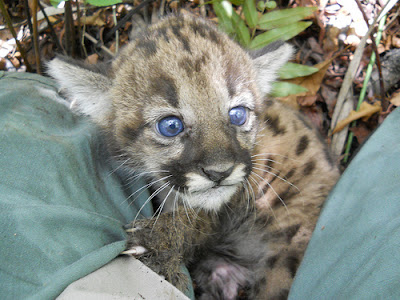 Orphaned Kitten Has Given Birth After Release
NAPLES, FL. -- Biologists with the Florida Fish and Wildlife Conservation Commission have discovered that a female Florida panther rescued as an orphaned kitten and raised in captivity has given birth just a few months after her release back into the wild.

“We were very excited to find this panther’s kitten,” said Dave Onorato, FWC panther biologist. “The fact that this panther has given birth is positive news for the recovery of this endangered species and a testament to the hard work of all involved in its rescue and rehabilitation.”

Biologists estimate the female panther became pregnant about three weeks after her release, when she was only 21 months old. That age is somewhat younger than the typical age of first conception for female panthers the FWC has documented.

While biologists are encouraged the female became a contributor to the population so quickly, it was not completely unexpected, given that her home range is within prime panther habitat.

After discovering the kitten over the weekend, biologists evaluated its health and tagged it for identification purposes to document whether it eventually becomes part of the adult population. An estimated 100 to 160 adult and subadult panthers remain in south Florida.

“Kitten survival rates are pretty low, but this kitten looked healthy and feisty,” said Onorato. “The kitten has a chance of one day contributing to the population as well.”

The FWC rescued the now young adult panther and its brother as 5-month-old kittens in September 2011 after their mother was found dead. They were then raised at the White Oak Conservation Center in Yulee until they were ready for release. The FWC released the male panther in April at the Rotenberger Wildlife Management Area in south Florida.

“The success story of this once orphaned panther giving birth in the wild following its rescue and rehabilitation would not be possible without license plate funds,” said Carol Knox, FWC’s Imperiled Species Section Leader.