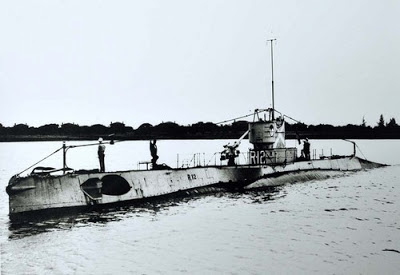 Official reports say the collision alarm was sounded and a report was made that the forward battery compartment was flooding. Orders were given to blow main ballast, but in about 15 seconds, the USS R-12 was lost along with the lives of forty-two men.

The commanding officer, the executive officer and three enlisted men were swept from the bridge as the boat sank but survived with the help of the father of a Port LaBelle resident, Bob Pool.

Pool's father, the late Sydney Herbert Pool, then a young Navy Quartermaster 2nd Class in the Naval Reserve, successfully rescued the sub's Captain, Lt. William D. Whetstone, and the boat's executive officer as the boat started sinking in 500 feet of water.  Pool was on the conning tower as the boat started sinking. The three men and two other sailors waited seven hours in the water before being rescued.

Pool's father later received the Navy's Gold Life Saving Medal, one of only seven ever given, for the heroic rescue. On May 10, 1945 Pool was honored in a radio program heard over the Mutual Broadcasting System, which related his heroic action in the critical moments as the submarine sank.

Pool also received a Commendation ribbon and letter from the Secretary of the Navy, James Forrestal, citing his bravery.

Bob Pool, of Port LaBelle will be attending a gathering at the Customs House Museum in Key West, Florida on the evening of June 12th to commemorate the World War II training submarine's tragic end miles off Key West.

Key West researcher and explorer Tim Taylor and the crew of his RV Tiburon found the ship two years ago. The Navy considers the site to be a war grave and is protected under the Sunken Military Craft Act.


The 186-foot R-12 was christened and commissioned in 1919. The diesel sub had a welded steel hull and could travel almost 15 mph on the surface and had a crew of 33. It served in the Pacific and Atlantic oceans.
Posted by Don Browne at 8:02 PM