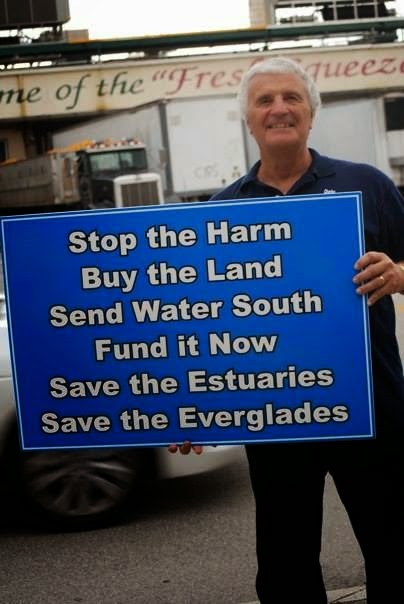 Environmentalists, community activists, elected officials, chamber of commerce officials, Realtors and business owners called upon Governor Rick Scott and his agencies to reject the development and buy US Sugar's land, protesting at FDEP offices in Ft. Myers and simultaneously in Ft. Pierce.

U.S. Sugar and Hilliard Brother's "Sugar Hill" would create zoning for a massive, sprawling city between the Everglades and its water source, Lake Okeechobee. The 67-square-mile project would bring the possibility of 18,000 new residential units and 25 million square feet of commercial, industrial, office and retail buildings directly into the Everglades Agricultural Area.

The Sierra Club says Hendry County already has two recently-approved sector plans and can build its economy without involving the lands optioned in the U.S. Sugar Land Acquisition contract and the Sugar Hill Sector Plan would draw infrastructure spending away from the established cities of Clewiston and Moore Haven to speculative warehouses, strip malls and suburban housing on U.S. Sugar Corp’s land.

The Sierra Club said this will end up for Hendry County residents "subsidizing U.S. Sugar’s sprawling city and turn the Clewiston and Moore Haven into ghost towns," while approval of the Sugar Hill Sector Plan "guarantees no economic development. It is a speculative, 50 year plan, which simply gives the landowner 'options' over that lengthy timeframe."

Speakers at the protests warned that the massive city planned south of Lake Okeechobee could sabotage efforts to protect the Caloosahatchee and St. Lucie estuaries and to restore the Everglades. It would ensure continued environmental and financial devastation for coastal communities as water from the Lake continues to be released east and west during the rainy season instead of being sent south the Everglades.

“The proposed Sugar Hill Sector Plan would impact the State’s ability and contract right to purchase these lands to be used for moving water south from Lake Okeechobee to the Everglades and stopping the destructive discharges to the coastal estuaries,” said Mark Perry, Executive Director of the Florida Oceanographic Society in Stuart.

The South Florida Water Management District has an option to buy 48,600 acres of U.S. Sugar land by October 2015. Over 13,000 acres of that land falls within the Sugar Hill city plan.

Sewall's Point (in Stewart, Fl) Commissioner Jacqui Thurlow-Lippisch pointed out the importance of maintaining options for sending water south: "There are many ways of sending the water south. We need to reserve all of these lands for trading and conservation in the future -- and for the kids."

Mark Anderson, Ft. Myers business and property owner, and representative of the Sanibel Captiva Chamber of Commerce, said: “Endless studies have confirmed the importance of restoring the connection from Lake Okeechobee and the Everglades to create a southward flow of water between the two. The studies are conclusive: it is now action that is needed to acquire the land needed for restoration and not development.”

"The Florida Department of Environmental Protection should formally advise the Department of Economic Opportunity to reject the Sector Plan because of its adverse effect on the Florida Everglades and the Caloosahatchee and St. Lucie estuaries, and the flood control, water supply and economic functions they provide to nearly 8 million Floridians,” said Julia Hathaway, organizer for the Sierra Club in West Palm Beach.

Dave Kirwan, Board Member of Reef Relief and a Cape Coral resident stated: “The Sugar Hill Sector Plan is a very bad idea for water quality and the environment of South Florida. Everglades restoration and improving the water quality of Florida Bay is critical to protecting and preserving Florida’s Barrier Reef; the only living coral reef in North America and the third largest in the World.”

A statement by Paton White, President of the Audubon Society of the Everglades said: “Clearly, the fast-tracking of such an ambitious and unprecedented development plan needs to slow down. We call on the Florida Department of Environmental Protection and the South Florida Water Management District to strongly oppose this short-sighted and inadequately researched plan when they make their comments this week to the Department of Economic Opportunity.”