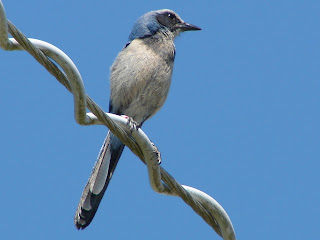 The Hendry-Glades Audubon is looking for a few birders, folks who would like to hike out to some of the best locations in Hendry and Glades county to count birds for the Fall Migration Count of local birds.

September 17th is the 6th year that Hendry and Glades County have participated in the Florida Fall North American Migration Count (NAMC). The area of a count is not a circle, but the boundaries of a County.

The idea is to have a contiguous interlocking set of non-overlapping counts across North America.

Volunteers will be using various modes of travel including cars, boats, and bicycles or will be on foot during their search for birds. The following teams, who will be meeting at 7 a.m., need additional counters, compilers and photographers: Lake Okeechobee, LaBelle, STA5, Okaloacoochee Slough State Forest, Lakeport Area and South Hendry (833/835).

Most of the teams will be surveying wetland areas where they will identify birds by sight or sound.

Reports of Owls, Woodpeckers and Scrub-Jays found in other habitats are needed in order to get a more accurate snapshot of the birds in inland Florida. During the 2010 NAMC teams did not observe Florida Scrub-Jays.

The Florida Scrub-Jay is identified as a legally protected Threatened Species by the United State Fish and Wildlife Service and Florida Fish and Wildlife Conservation Commission. It is Florida’s only endemic bird species (occurring nowhere else). They prefer living in Florida’s scrub oak and scrubby Flatwoods habitat with nutrient-poor soil where trees are 3-10 feet tall. Each family will maintain a permanent territory ranging from 5 to 50 acres, but the average range is about 25 acres.

This large songbird has a blue gray head, wings and tail with a pale gray-brown back and underparts. Juveniles who are less than about 5 months old will have a dusky brown head and neck, but the rest of the body will be like the adult. It often makes a harsh and scratch call with the female making a dry rattling sound.

They eat a variety of acorns, seeds, peanuts, insects, tree frogs, turtles, snakes, lizards and young mice. Occasionally they have been observed robbing other birds of their eggs or nestlings. Acorns from a variety of oaks are buried by the Scrub Jays in the fall to be eaten in the winter or spring,

They are one of the few cooperative breeding birds in North America with families ranging in size from 2 to 8 birds. The young will remain in their parent’s habitat for several years where they help rear the young, act as sentries who watch for predators and defend the territory against other Florida Scrub-Jay groups.

If you would like to volunteer for the September 17th NAMC or join Hendry-Glades Audubon volunteers for the October 15th STA5 bird trip, send an e-mail to Margaret England, at sta5birding@embarqmail.com with your name and contact information including an emergency cell number for the trip day, the date you want to go, and the number in your party.