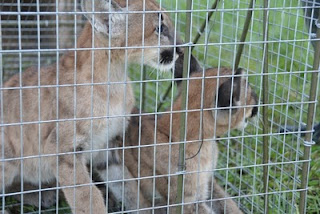 Two panther kittens were rescued after their mother died in a remote rural area of Collier county, Florida

They may have lost their mother, but two 5-month-old Florida panther kittens have a good chance of survival, thanks to the efforts of staff from the Florida Fish and Wildlife Conservation Commission (FWC), U.S. Fish and Wildlife Service, White Oak Conservation Center in North Florida and a volunteer with Big Cypress National Preserve.

The kittens were successfully captured this morning near the Corkscrew Regional Ecosystem Watershed area in Collier County.

FWC biologists began tracking the kittens' mother in February. She was captured, collared and released. In May, they examined and marked her three kittens on private land in Lee County.

On Sept. 14, a mortality signal from the mother's collar was detected during a routine telemetry flight. Her skeletal remains were located later that day. The cause of death is unknown.

Knowing orphaned kittens cannot survive long in the wild without their mother, biologists worked quickly to capture the kittens. Remote cameras and traps were set. Several days went by with no activity, and hope the kittens would be found alive was fading.

That is until Thursday. FWC biologists checked the cameras and found pictures of two panther kittens.

This morning, two kittens were trapped together in a single trap. It is believed that only two of the three kittens survived to this age. They were successfully rescued and transported via private plane to White Oak Conservation Center, where they will be raised and conditioned for a future return to the wild.

"Losing a mother panther in the prime of her life is tough," said Darrell Land, FWC biologist and panther team leader. "But we hope we can finish the job she started by raising her kittens so they can be returned to the wild. With only 100-160 adult panthers remaining in South Florida, every individual is important."
Posted by Don Browne at 6:38 PM