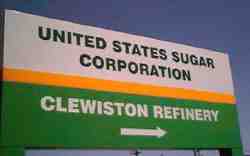 Never Ending Saga - Will Airport Eventually Be Turned Over To U.S. Sugar Interests?

LABELLE, FL. -- The Hendry County commissioners last week voted 4-0 to go ahead with spending more money  for legal work on the possibility of turning over the Airglades Airport in central Hendry county to the private interests of U.S. Sugar, Joe Hilliard, and a principal of a new company originally formed to buy the airport property, Florida Cargo Fresh, Inc.

As reported here two years ago Florida Cargo Fresh originally sought to buy or lease the airport and has a dubious success history among it's officers.

Florida Cargo Fresh Inc. was named as the "secret" company a handful of county officials and the Hendry Economic Development Office had been talking with, negotiating the sale of the multi-million dollar assets of one of Hendry county's two public airports.

Florida Cargo Fresh, the reported buyer of Airglades Airport back in 2010, had no track record having just been incorporated December 31, 2009 with amended articles of incorporation on February 8, 2010 and again on April 13, 2010 listing an address at 936 West Heron Circle, Winter Haven, Florida.

The company's Winter Haven "corporate office" is the house, complete with backyard swimming pool, of President Fred Ford's wife. Frederick C. Ford is a man with numerous apparent recent and past business failures.

The company's vice president/treasurer was Charles W. Harrison, Jr. of Miami, and he now is a manager with the newly formed company and purported airport buyer "Airglades International Airport, LLC" along with other Miami residents at the same address, David M. Sandri, David Sutton, and Bruce J. Jacobson. Joining them in the venture is Joe M. Hilliard II, and Mary Elizabeth Hilliard-Carroll of Clewiston. Airglades International's corporate offices are at 111 Ponce DeLeon Avenue, the headquarters of U.S. Sugar.

U.S. Sugar owns the land surrounding the airport and operates numerous aircraft out of hangars at Airglades, and buying lots of fuel from Hendry county to operate the airplanes.

Any sale or leasing of Airglades Airport is subject to approval by the Federal Aviation Administration after public comment.

The Aircraft Owner And Pilot Association (AOPA) says the federal program has not approved any airports for privatization since the program's beginning in 1997, and any approvals would go through many lengthy steps before actualization.

Hendry county and it's quasi-governmental Economic Development Office continues to work towards selling or leasing the largest of Hendry county's two airports, originally attempting a deal with the once secret fledgling businessman's Florida Cargo Fresh, Inc., the company having little experience operating an airport.

$12,500 came from the Economic Development Council, Inc. (which is funded by Hendry County), and the county attorney's office used $25,000 of its funds. $62,500 is came from the Airglades Airport (owned by the county) account for attorney Kirsch to process the paperwork involved.

Although the FAA must approve any transfer of a public airport to a private entity, and has indicated that is highly unlikely to do so, the county continues to argue for funds for water and wastewater appropriations and grants, citing this "potential" project.

The term "boondoggle" is used to refer to protracted government or corporate projects involving large numbers of people and usually heavy expenditure, where at some point, the key operators, having realized that the project will never work, are still reluctant to bring this to the attention of their superiors. Generally there is an aspect of "going through the motions" – for example, continuing research and development – as long as funds are available to keep paying the researchers' and executives' salaries.

The situation can be allowed to continue for what seems like unreasonably long periods, as senior management are often reluctant to admit that they allowed a failed project to go on for so long. In many cases, the actual device itself may eventually work, but not well enough to ever recoup its development costs.