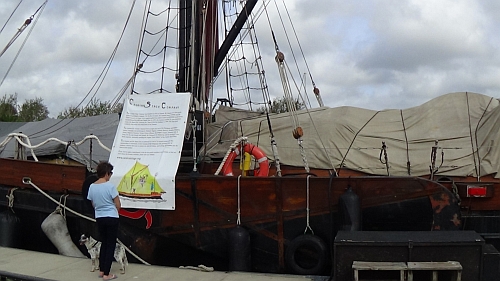 LABELLE, FL. -- The Caravan Stage Company, with its 90 foot "tall ship", the Amara Zee, has been docked at the Port LaBelle Marina for a few weeks, providing an unusual visual feast for visitors and yachtsmen at the docks off the Caloosahatchee River.

The custom built wooden ship carries about 40 performers and crew members around the world providing multi-media performances to viewers on shore.

The founding directors, Paul Kirby and Adriana Kelder started the non-profit Caravan performance company to bring original contemporary theater to audiences; it's original traveling mode being six large Caravans pulled by teams of Clydesdale horses and performing in a large tent with a capacity of 800 people.

For 20 years, the Caravan toured with horse and wagon along the west coast of Canada and the USA, Ontario and Florida, but in 1993 the company changed its mode of transport by building the Amara Zee custom-built theater ship. The ship was built to be the stage for the theater and house the performers and theater technicians who would then double as crew from site to site. The audiences sit on shore watching the performance staged on the decks and in the rigging of the ship.

The Caravan, established in 1970, is one of Canada’s oldest non-profit theater companies.