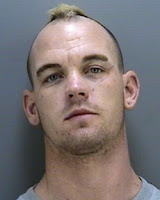 LABELLE, FL. -- A LaBelle man with a long criminal history going back to 2001 has been arrested on theft and drug charges.

Sanchez reported that when she arrived at work on Friday, she locked her car, dropped her keys into her purse and went inside to her office located on the first floor of the Hendry County Courthouse. When she left work at 5:00 pm, and retrieved her purse she was unable to find her keys. Sanchez returned to the parking lot area in the rear of the Courthouse and discovered her vehicle gone.

On January 20, Hendry County Investigators spoke further with Sanchez about the vehicle and reviewed the surveillance video from the courthouse. Investigators were able to identify the suspect.

On Saturday, January 26, 2012, Hendry County Narcotic Investigators contacted Investigators working the stolen vehicle case. They reported that they had received information from a witness that the stolen Volkswagen could be found at 689 Carter Street, a vacant residence. The vehicle was located and returned to Sanchez and Griner.

In the evening hours of January 26, 2012, Narcotic Investigator along with Deputy Leverenz located and arrested 29 year old Michael Dean Vahle (photo above). He was charged with Vehicle Theft, Larceny, and Marijuana Possession. He is currently being held in the Hendry County Jail on $31,500.00 bond.
Posted by Don Browne at 3:48 PM