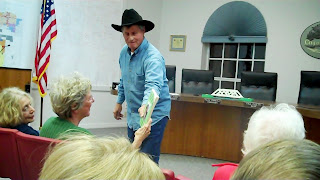 Well known Florida Cracker artist, musician, and raconteur Bubba Whidden says he will overcome his innate shyness and agreed to be the guest speaker at the monthly museum meeting.

Bubba may talk about his vast knowledge of Florida's history, pioneer Southwest Florida families -- many of whom are his relatives -- or his own experiences hunting cows for Red Cattle Company among others, or his experiences in law enforcement, or he may show and explain his paintings of outdoor scenes in Southwest Florida.

There is even a possiblility that he may entice his son, Hendry County Sheriff Steve Whidden, into joining him for a musical interlude. Whatever Bubba has in store, it will be a treat.

Refreshments will be served after the program meeting which will wrap up with a short business meeting bringing the members up to date on the move into the 1911 William H. Poole Drygoods Emporium and Residence at 360 North Bridge Street and the current status of the museum's application for a $50,000 Small Matching Grant from the Florida Division of Historic Research to help move the Judge H. A. Rider Home and Law Office from their current location at 150 South Lee Street to their new property in the Downtown LaBelle Historic District.
Posted by Don Browne at 9:39 AM