Google announced the latest in the Chromebook line this week, featuring a very fast processor and large drive for plenty of storage on the computer itself, in addition to "cloud" storage like all Chromebooks.

In it's announcement Google emphasizes "Chromebooks were designed to make computing speedy, simple and secure. For many of you, they have become the perfect, additional (and yes, affordable) computer: ideal for catching up on emails, sharing documents and chatting via Hangouts."

Google has partnered with Samsung, Acer, Lenovo and HP to build the devices and the Samsung Chromebook has been #1 on Amazon’s bestseller list for laptops every day since it launched 125 days ago in the U.S., "and Chromebooks now represent more than 10 percent of notebook sales at Currys PC World, the largest electronics retailer in the U.K.," said Google.

The Pixel, was especially designed for power users who have fully embraced the cloud, says Google. 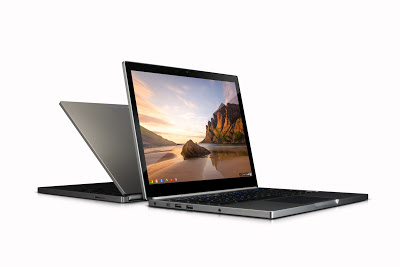 Specifications: This Chromebook has the highest pixel density (239 pixels per inch) of any laptop screen on the market today. With 4.3 million pixels, the display offers sharp text, vivid colors and extra-wide viewing angles. Touch has been added for a more immersive experience.

"The body of the Pixel is made from an anodized aluminum alloy to create a smooth and durable surface; vents are hidden, screws are invisible and the stereo speakers are seamlessly tucked away beneath the backlit keyboard. The touchpad is made from etched glass, analyzed and honed using a laser microscope to ensure precise navigation. The Pixel also has powerful, full-range speakers for crisp sound, a 720p webcam for clear video, and a total of three microphones designed to cancel out surrounding noise."

Connectivity: The Pixel has a great WiFi range thanks to carefully positioned antennas and dual-band support. "Long-term evolution" (LTE) is engineered directly into the machine, delivering fast connectivity across Verizon's network, the largest, fastest 4G LTE network in the U.S. (LTE model optional). It also comes with 12 free GoGo® Inflight Internet passes for those times you need to connect while in the air.

Storage: Since this Chromebook is for people who live in the cloud, one terabyte of Google Drive cloud storage* is included with the Pixel. This enables you to save, access and share photos, videos, documents, and all of your stuff from all of your devices, from anywhere.
The Pixel boots up in seconds and never slows down, requires almost zero setup or maintenance, and comes with built-in virus protection and it stays up to date with automatic updates every few weeks.