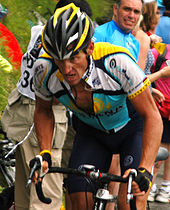 The Department of Justice announced today that the government has joined a civil lawsuit alleging that Lance Armstrong, Johan Bruyneel and Tailwind Sports LLC and Tailwind Sports Corporation (Tailwind) submitted or caused the submission of false claims to the U.S. Postal Service (USPS) in connection with its sponsorship of a professional bicycle racing team by regularly employing banned substances and methods to enhance their performance, in violation of the USPS sponsorship agreements.

From 1996 through 2004, the USPS sponsored a professional cycling team owned by Tailwind and its predecessors. Lance Armstrong was the lead rider on the team, and between 1999 and 2004, he won six consecutive Tour de France titles as a member of the USPS-sponsored team. Johan Bruyneel was the directeur sportif, or manager, of the cycling team.

The sponsorship agreements gave the USPS certain promotional rights, including the right to prominent placement of the USPS logo on the cycling team’s uniform. Each of the agreements required the team to follow the rules of cycling’s governing bodies, which prohibited the use of certain performance enhancing substances and methods. Between 2001 and 2004 alone, the Postal Service paid $31 million in sponsorship fees.

The lawsuit joined today by the government alleges that riders on the USPS-sponsored team, including Armstrong, knowingly caused the USPS agreements to be violated by regularly employing banned substances and methods to enhance their performance. The lawsuit further alleges that Bruyneel knew that team members were using performance enhancing substances and facilitated the practice.

“Lance Armstrong and his cycling team took more than $30 million from the U.S. Postal Service based on their contractual promise to play fair and abide by the rules – including the rules against doping,” said Ronald C. Machen Jr., U.S. Attorney for the District of Columbia. “The Postal Service has now seen its sponsorship unfairly associated with what has been described as ‘the most sophisticated, professionalized, and successful doping program that sport has ever seen."

For many years, including during the USPS sponsorships, Armstrong and others repeatedly denied that the team used performance enhancing substances or methods. Yet on Oct. 10, 2012, the U.S. Anti-Doping Agency (USADA) issued a report concluding that Armstrong used banned performance enhancing substances starting in at least 1998 and continuing throughout his professional career, and that he pressured and helped his teammates to engage in similar conduct. Accordingly, USADA disqualified all of his competitive results since Aug. 1, 1998, including his seven Tour de France victories, and banned him from sport for life pursuant to the World Anti-Doping Code.

In a recently-televised interview with Oprah Winfrey, Armstrong contradicted his earlier denials and admitted that he used banned substances and methods throughout his career, starting in the mid-1990s. In particular, he admitted having engaged in banned practices during each of his seven Tour de France victories, including the six he won as a USPS rider. Armstrong explained that he avoided detection by anti-doping authorities by carefully timing his use of banned drugs so that they would leave his system prior to his undergoing cycling’s required periodic drug testing.

The lawsuit joined by the United States was filed by Floyd Landis, a former rider and teammate of Armstrong on the USPS sponsored team from 2002 through 2004. The lawsuit was filed under the False Claims Act, which imposes liability on those who submit false claims for government funds, and provides for the recovery of three times the government’s damages, plus civil penalties.