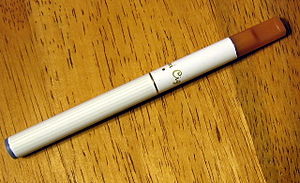 About one in five U.S. adult cigarette smokers have tried an electronic cigarette, says the CDC. The device is an electronic inhaler that vaporizes a liquid solution into an aerosol mist, simulating the act of tobacco smoking. But the effects of e-cigarettes in long term health is not known.

“If large numbers of adult smokers become users of both traditional cigarettes and e-cigarettes — rather than using e-cigarettes to quit cigarettes completely — the net public health effect could be quite negative,” said Dr. Tim McAfee, director of the Office on Smoking and Health at CDC.

In 2011, about 21 percent of adults who smoke traditional cigarettes had used electronic cigarettes, up from about 10 percent in 2010, according to a study released today by the Centers for Disease Control and Prevention.

In both 2010 and 2011, e-cigarette use was significantly higher among current smokers compared to both former and never smokers. Overall, about six percent of all adults have tried e-cigarettes, with estimates nearly doubling from 2010.

CDC Director Dr. Tom Frieden said, “There is still a lot we don’t know about these products, including whether they will decrease or increase use of traditional cigarettes.”

for information on quitting and preventing children from using tobacco. For stories of people who have quit successfully, visit http://www.cdc.gov/tips.
Posted by Don Browne at 3:01 PM