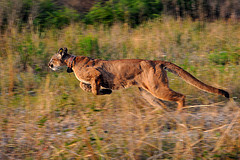 The panther and its brother had been raised at the White Oak Conservation Center in Yulee since they were 5 months old. The FWC rescued the two panthers as kittens in September 2011 near the Corkscrew Regional Ecosystem Watershed in northern Collier County after their mother was found dead.

“This panther is healthy and has grown to a size that should prepare her for life in the wild,” said Darrell Land, FWC panther team leader. “The goal in any panther rescue is to be able to release the animal back into the wild to aid in the recovery of this endangered species.”

The release was coordinated in consultation with partners from the U.S. Fish and Wildlife Service.

Five other kittens of similar ages – three females and two males – have been raised at White Oak and released in south Florida.

“We are grateful for the work the staff at White Oak has done to prepare this panther and others for release,” said Land.

Biologists chose the Picayune Strand State Forest for the release of this panther after they evaluated the home ranges of other females in the region and found available space between them.

An estimated 100 to 160 adult and subadult panthers remain in south Florida.

Florida residents can support conservation efforts like the rescue and rehabilitation of this panther through the purchase of a panther license plate. Fees from license plate sales are the primary funding source for the FWC’s research and management of Florida panthers.